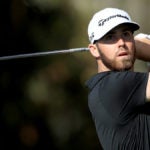 Matthew Wolff will team with Rickie Fowler to face Rory McIlroy and Dustin Johnson in the TaylorMade Driving Relief event.

Live golf will make its long-awaited return this weekend with the TaylorMade Driving Relief event at Seminole Golf Club. The two-man skins match in Florida will raise money for Covid-19 relief efforts and first responders and will pit Rory McIlroy and Dustin Johnson against Rickie Fowler and Matthew Wolff.

McIlroy and Johnson are current and former world number ones, respectively, while Fowler is arguably one of the most popular player in the game. And then there is Wolff, who is well known in golf circles for his unique swing and meteoric rise from college golfer to PGA Tour winner, but to the general sports population, the 21-year-old is relatively unknown.

GOLF.com contributor Ryan Asselta caught up with Wolff just days before playing in the most high-profile event of his career. With his infectious enthusiasm on full display, Wolff dished on playing the role of underdog in the match, the best advice Rickie has ever given him, and if and when he’ll talk a little smack to Rory and DJ.

Ryan Asselta: You guys are the clear-cut underdogs in the TaylorMade Driving Relief match versus Rory McIlroy and Dustin Johnson. Does being the ’dogs motivate you?

Matthew Wolff: Definitely. We’re hearing that we’re underdogs from pretty much everyone, but in our opinion, we really don’t think we are. Anything could happen on any given day. DJ and Rory are two of the best players in the world, but I believe that I am, too, and Rickie obviously feels the same way. It’s gonna be a lot of fun to go up against them and compete and most importantly, raise money for Covid relief for first responders.

Matthew Wolff: I’ve never really been a trash-talker. I feel like I’m pretty strong mentally, and I kind of just let my game do the talking. I wouldn’t say that I like to get in people’s heads. I’ve tried it a couple times just with my buddies, and it really doesn’t go over well. Obviously, I can trash-talk my friends because I’m better than them. (Laugh.) Maybe I’ll blow a couple drives past Rory and DJ and say something. But that’s about it. (Laugh.)

Ryan Asselta: You’ve got the natural connection with Rickie. Both grew up in Southern California and played at Oklahoma State. What’s been the best piece of advice Rickie has given you?

Matthew Wolff: He’s given me a lot of advice, to be honest. He’s really looked out for me, not only in college but as soon as I turned pro. My sophomore year in college I was playing the Waste Management as an amateur. Rickie told me, ‘The biggest thing is just to conserve your energy.’ He was right because I made the cut, and by the end of Saturday and all of Sunday, Iwas just so drained. I think because at the beginning of the week I over-prepared. I was hitting balls Monday, Tuesday, Wednesday, and I was out there from 9 a.m. to 5 p.m. You can wear your body down like that. And that’s one thing that he told me that really stuck.

Ryan Asselta: The TaylorMade Driving Relief will certainly have a different feel to it on many levels. No caddies are allowed so you guys will be carrying your own bags.

Matthew Wolff: Yeah, there’s no way all three of those players have carried their bag in the last couple years. With me being in college last year, I’m still used to it.

Ryan Asselta: Does that give you an advantage?

Matthew Wolff: I don’t know. … DJ and Rory are both pretty fit. I don’t know how much of an advantage that would be. I do have really strong legs, though, so maybe – (laugh) maybe I can use that as an advantage. I’m just hoping my bag is really light.

Ryan Asselta: You’re used to playing in front of thousands of fans week in and week out on the PGA Tour, but those fans won’t be at Seminole for this match. At the same time, you could have a much bigger audience on TV. With no live sports on, you guys will be the only show in town and millions will be watching. Do you expect to be nervous?

Matthew Wolff: Well, thanks for bringing that up. (Laugh.) I mean, to be honest, I really wasn’t thinking about that.  I’m always nervous because if you’re not nervous about something then you probably don’t care about it. I think I’ll feel really comfortable. Rickie is really good at keeping things calm and making everyone else around him feel super comfortable. The vibe, when I first get there, might be a little different. I don’t expect it to be any more nerve-wracking than the putt at 3M that I made.

Ryan Asselta: Tell us about Seminole. I know you’ve played in the Pro-Member there. What’s the key to playing well at Seminole?

Matthew Wolff: Yeah, I played with John Powers, and the one thing that he said was that putting is really important there. The greens are definitely very undulated. And there’s a lot of slopes that are pretty hard to read. But luckily, I have Rickie on my team. He’s arguably one of the best putters in the world so that’ll be a big advantage to us. Another defense is that Seminole has since it’s right on the ocean is the wind. If it’s windy, it might be a little tougher. In that Pro-Member, we ended up finishing second. So, I played really well there, and I really like the style and the look of the course. I feel pretty comfortable there and my swing and my game feel good so I’m just excited. Excited to go out and compete and be part of raising some money.