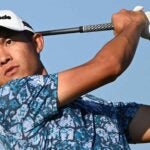 Collin Morikawa hits his tee shot on the 18th hole during the final round of the Open Championship.

Collin Morikawa, standing on the 18th tee at Royal St. George’s, leading by two shots during the final round of last week’s Open Championship, on the cusp of his second major championship, backed away from his ball. The fans around the tee box began to laugh. “Ladies and gentlemen, please,” a marshal yelled. Morikawa himself laughed.

What in the name of the Claret Jug was so funny?

“Some spectator, at some point in the day, snuck a little, like, old-school microphone, like a recording, threw it underneath one of the marshals around there and started playing like these farting noises right as I was about to swing,” Morikawa said this week on the Pardon My Take podcast.

“So I don’t think people really understood why I stepped away or like I don’t think the announcers really knew what was going on. So we thought it was a fan making fun of or like playing something on their phone. Marshal went and looked around the grass because it’s really long and then they found it, and yeah, how crazy is that?”

Very. As well as Morikawa had executed to that point, perhaps even more impressive was the execution of the prankster, who: one, snuck in a “fart machine” to the Open; two, concealed it in the grass on 18; and three, revealed it during the final pairing. Still, Morikawa would eventually come back to the ball, hit it down the right side of the fairway, make his par and win by two.

But, he was asked on the podcast, did he ever think of hitting through the noise?

Which speaks to his thinking on 18 before he had to back away.

“You just have to think about, like, how do you hit the best shot possible, right?” he said on the podcast. “It’s as simple as that. What do you need to do best to make — four shots is all I needed to get in the hole. I could have had five, [but] I’d rather make par so how are we going to make four shots the best shots I’m going to hit all day and get out and win this tournament.

“So your mind can wander — there’s a lot of time to wander, especially with nine holes left. I just had to keep reminding myself about what does a good shot look like, like what do I need to do here, how do I do this, and just try to make my mind think about golf or something else rather than what if, right? What if I do that? What if he does that? You can’t let your mind go there.”