What Tiger Woods said to Hideki Matsuyama after his Masters win 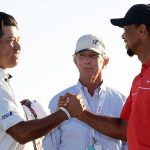 Hideki Matsuyama, during Saturday’s rain delay at the Masters, played games on his phone.

On Sunday night, he could see a tweet from Tiger Woods on it.

While the five-time green jacket winner, and 15-time major champion overall, may not be playing golf, he is watching it. And tweeting about it. At 7:41 p.m. ET from an iPhone, Woods congratulated Matsuyama, who about an hour earlier had won the Masters by a stroke for his first major victory, and his home country of Japan’s first major win by a male golfer.

“Making Japan proud Hideki,” Woods tweeted. “Congratulations on such a huge accomplishment for you and your country. This historical @TheMasters win will impact the entire golf world.”

While Woods recovers at his Florida home after suffering multiple leg injuries following a car crash in mid-February, he’s shown lately that he’s well enough to tweet. (Or at least relay a message to someone who can.) On Tuesday, he jabbed Dustin Johnson, last year’s Masters winner, ahead of the Champions Dinner at Augusta National.

“I’ll miss running up @DJohnsonPGA’s bill at the Champions Dinner tonight,” Woods tweeted. “It’s still one of my favorite nights of the year.”

Two days earlier, he congratulated the women’s basketball team at Stanford after its win in the national title game. Woods played college golf for the Cardinal.

“Congratulations to the entire @StanfordWBB team and to Coach VanDerveer,” Woods tweeted. “What a win. Home of Champions! Go Card!”

And a day before that, Woods tweeted at Tsubasa Kajitani, who won the second Augusta National Women’s Amateur a week before the Masters.

“Congrats to Tsubasa Kajitani on winning the @anwagolf with an amazing playoff finish,” Woods tweeted. “Enjoy the special moment, and good luck to all of the kids tomorrow in the @DriveChipPutt.”

His first sports tweet post-accident came just weeks after his crash. During the final round of the WGC-Workday Championship, several players wore Woods’ traditional red shirt and black pants ensemble. The tribute led him to Twitter.

“It is hard to explain how touching today was when I turned on the tv and saw all the red shirts,” it read. “To every golfer and every fan, you are truly helping me get through this tough time.”

Several players have said they’ve either heard from Woods from a phone call or text, or have visited him. On Tuesday, Rory McIlroy said he’s in “decent spirits.” Justin Thomas said Woods was “bummed” not to be playing in the practice rounds. “But he’s been good,” Thomas said.