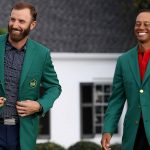 Tiger Woods shortly after presenting Dustin Johnson with his green jacket at the 2020 Masters.

Tuesday night was an important night at Augusta National as far as Masters traditions go: the annual Champions Dinner. Each year, the reigning champ hosts a dinner for past winners and chooses the menu they will dine on.

Last year, Tiger Woods hosted his fifth winner’s dinner, albeit a slightly untraditional one given Covid-19 precautions. This year, it was Dustin Johnson’s turn, and he served up a feast that included prime filet mignon and miso-marinated sea bass, peach cobbler for dessert and pigs-in-a-blanket to kick things off.

Unfortunately, Tiger is back home in Florida recovering from his car accident following the Genesis Invitational, so he wasn’t able to be there in person to celebrate Johnson’s victory over food. We’ve heard little from the 15-time major champ lately, although Rory McIlroy visited him two weeks ago and shared a great story about it.

But on Tuesday evening, Woods broke his Twitter silence with a tweet about the Champions Dinner, along with a tease directed at this year’s host.

Woods wrote, “I’ll miss running up @DJohnsonPGA’s bill at the Champions Dinner tonight. It’s still one of my favorite nights of the year.”

Apparently, the reigning champion doesn’t just have to choose the menu for the Champions dinner, but he also has to foot the bill. Johnson quickly responded in kind, noting that the other Masters champions will “miss having you here.”

The 2021 Masters gets underway on Thursday, and whether or not Johnson defends his title, he has a permanent place reserved at the Champions Dinner table and should be able to share plenty of meals with Tiger in the future — on someone else’s tab.