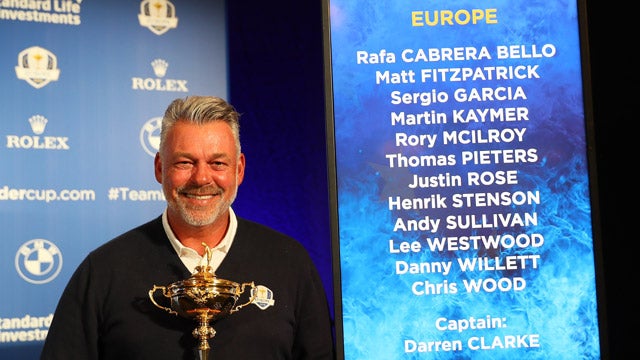 The European Ryder Cup dynasty is up against its toughest test since 2008. Even though they have won eight of the last 10 meetings, Team Europe will enter Hazeltine as underdogs against an American squad that has put more effort and energy into winning the Cup than ever before. With a mix of six solid stalwarts and six upstart rookies, captain Darren Clarke will have his work cut out to replicate the captaincy brilliance of 2014 leader Paul McGinley. If Europe wins, it will be one of the most devastating losses for Team USA in the history of the Cup. Here are the 12 players who are striving to make that happen.

Bio: McIlroy is the anchor for Team Europe. First, he’s a singles monster, notching a 28-11-2 career mark including a win and fourth-place finish at the last two WGC-Match Play events. He also memorably mopped the floor with Rickie Fowler 5&4 at the 2014 Ryder Cup. When McIlroy is hot, he’s borderline untouchable 1-on-1. He hasn’t been as dominant in team matches (a 4-4-3 mark), but he paired with Sergio Garcia in 2014 for a strong duo. His putter has been suspect all season before he employed a new flatstick and putting coach during the FedEx Cup playoffs, which immediately led to a victory. McIlroy has been making snide comments about the U.S. task force for the last two years, and he’s earned that confidence. He’s never been on a losing Ryder Cup team.

Bio: So you have forgotten that Willett won the Masters? No one can really blame you. Since his first major victory, Willett missed the cut at the Players followed by 37th, 53rd and 79th finishes in the season’s three remaining majors. Even though he was second on the Euro points list, he’s a rookie that might not inspire much fear in fans of Team USA. Perhaps he should though, as he finished in third at the 2015 WGC-Match Play, losing to Gary Woodland in the semi-final match. Even though he hasn’t played well since Augusta and is a Ryder Cup rookie, Willett is a steady ballstriker and a gamer in match play.

Bio: Will Stenson’s knee hold up? That question could turn the tide of this event, as Europe is putting a ton of pressure on its six vets to carry the six rookies on the squad. Stenson is one of those mainstays, but he has a slight cartilage tear in his right knee that forced him to withdraw from the Barclays. He says it doesn’t need surgery, and he’s scheduled to play in the Ryder Cup, but the injury has to be worrying for Team Europe. Mainly because the pairing of Stenson and Rose was untouchable in 2014, running off a 3-0 record. Stenson is always an intimidating opponent, but especially so now that he’s a major champion.

Bio: The first of many unknowns who could be a thorn in the side of the Americans. Wood won the BMW PGA Championship but was forced to withdraw from the British Open with a neck injury, and then missed the cut at the PGA Championship. He isn’t coming into the Ryder Cup in top form necessarily, but the 6-foot-6 Englishman can make a name for himself with a solid week at Hazeltine.

Bio: Garcia’s first Ryder Cup was in 1999 as a 19-year-old, and now Garcia is one of the grizzled old men on the roster. For as much as you think he will collapse in the final round of a major, you equally believe Garcia will come through while wearing the blue and yellow. His record is fourth-best all time for Team Europe with a minimum of 15 matches played. And that counts a disastrous 2008 Cup where he went 0-2-2 with a humiliating defeat at the hands of Anthony Kim. Garcia is likely to take the six rookies under his wing and help cement his legacy as one of the greatest Ryder Cuppers of all-time. Bio: Bello is 32 years old, has never won on the PGA Tour and only has two Euro tour wins with the latest coming in 2012. Yet he’s fifth on the points list for the Euros. How you ask? Even though his best finish in a major was 17th, his worst result was 49th. He had early season success with a run of four top-5 finishes and hasn’t missed a cut in 2016 on the European tour. (He did miss the cut at the Players Championship.) He doesn’t wow in any particular stat, but he has greatly improved his putting from last season. Bello has match play chops too; he took third at the 2016 WGC-Match Play.

Bio: Normally a calm and collected presence on the course, Rose loves to play to the crowd and is quite excitable during Ryder Cup play. And for good reason: he’s almost unbeatable. He should be over the gold medal hangover by the end of September, and he’s fully recovered from a mid-season back injury. This will be Rose’s fourth Ryder Cup, and he’s earned three, three and four points, respectively. He’s a stud.

Bio: Andy Sullivan won three times on the Euro tour in 2015 and followed that up with three solid major performances in 2016. The 29-year-old had a hot streak this summer with T5 and T6 finishes in the French and Scottish Opens, but his best finish since the PGA Championship has been 78th place at the Omega European Masters. He’s not big nor particularly long, but he makes his money with the putter. It will be interesting to see who Clarke pairs Sullivan with in the team events, as he has Walker Cup experience but will be a Ryder Cup rookie.

Bio: Fitzpatrick is the youngest member in the event at age 22, but he has already proven he has what it takes to win as a professional. He turned pro in 2014 and won the British Masters in 2015 followed by the Nordea Masters one year later. He notched a T7 at the Masters earlier this season, but that’s the peak of his major credentials. With his slight frame and lack of pop, he doesn’t inspire the same intimidation factor as a Thomas Pieters, but Fitz is a gamer. He won the 2012 Boys Amateur, the 2013 U.S. Amateur, went 3-1 in the 2013 Walker Cup and was 2-1 in the 2016 Eurasia Cup. Watch out.

Bio: Westwood is a bit like Sergio, as he has never won a major championship, but has been a stalwart in the last two decades as a part of Team Europe’s recent Ryder Cup dominance. He first qualified for the team in 1997 as a 24-year-old rookie and has played in every Cup since. He’s played in 41 total matches with his strength being team events (a 17-9-6 mark vs. a 3-6 singles record). He’s run the gamut in his role within the team, but always has delivered. In 2002, he had fallen to 148th in the World Rankings and earned three points. In 2006, he was a captain’s pick and earned four points. In 2010, he was the No. 1 ranked player in the World Rankings and earned 2.5 points. In 2014, he was a captain’s pick once again and earned two points. Westwood is now the elder statesman on the team, but that makes him no less dangerous. Bio: Kaymer is playing on his fourth-straight European team and has never seen a loss to the United States. His point earning record is solid (2.5, 1, 2), and his play in 2016 earned him a captain’s selection. Even though he hasn’t won since his 2014 U.S. Open victory, Kaymer paired two 12th place major finishes with a T7 at the 2016 PGA. Russell Knox has had more recent success, but Kaymer’s mix of experience and match play record was too much to overcome.

Bio: The sixth and final rookie that Darren Clarke will trot out at Hazeltine. Pieters was born in Belgium, but played college golf at the University of Illinois. He’s 24 and has only played in two major championships, but he has three European tour wins. One of those was vital to his selection: Pieters won the Made in Denmark one week before Clarke turned in his picks, and along with his runner-up finish the week before and a fourth-place finish at the Olympics, Pieters proved irresistible. He may not play in that many matches, but he’s the type of player who can run off a dominant singles performance thanks to his length.