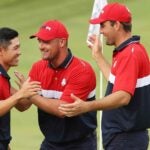 Collin Morikawa, Bryson DeChambeau and Scottie Scheffler — all three in their 20s — helped lead the U.S. to victory at the 2021 Ryder Cup.

It’s no secret PGA Tour stars are getting younger and younger. Between World No. 1 Scottie Scheffler and young studs Viktor Hovland and Collin Morikawa, a high percentage of the top-ranked players in the world are in their 20s — quite a departure from the status quo a generation ago.

One player who is particularly well-positioned to articulate just how much things have changed is three-time senior major champion Jay Haas. Haas’ PGA Tour heyday stretched from the late ’70s to the early ’90s, and he’s watched both his sons, Jay Jr. and Bill, compete professionally, with Bill winning the FedEx Cup in 2011.

On this week’s episode of Off Course with Claude Harmon, Haas explained how this new generation of players differs from his own.

“I certainly wasn’t ready. When I came out and watched the best players in the world, I was far from their talent and their experience, obviously,” Haas began. “I think today’s players are just more seasoned, whether they play more tournaments when they’re juniors, whether the college game is that much better.”

Haas explained that when he was coming up, there were probably six or eight strong collegiate golf programs. Now, he says, there’s 50 or 60.

“The guys learn to compete maybe at a higher level sooner than we did,” Haas said. “Junior golf, shoot. I bet I didn’t play three or four tournaments a year. And they were just local tournaments.”

Thanks to the AJGA and other organizations, today’s young players may have a schedule that includes 20 or 30 tournaments a year, Haas said. And that’s before they start competing in high school.

“Perhaps their timetable is moving up a little bit,” Haas said. “They certainly look more ready.”

Haas also noted that most of today’s top players are in their 20s — a stark contrast from his day.

“That is flipped quite a bit,” he said. “Probably a 10-year difference, I would say, from the ’70s or ’80s until now. If you took the average age of the top, say, 20 players in the world, I bet there’s a good 10-year difference. And I just think they’re more prepared. And then the young guys see the other young guys playing well, and they say, well heck, I beat that guy when I was playing at Oklahoma or wherever I played. It just gives them more encouragement that they can do it as well.”

For more from Haas, including why making a PGA Tour cut at the Zurich was so meaningful, and the old-school element of Scottie Scheffler’s swing that he loves, check out the full interview below.