Is Scottie Scheffler a truly great player or just on a serious heater? 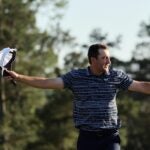 With a green jacket now hanging in his closet, four total victories since February and more than $10 million in winnings since October, there’s no debating that Scottie Scheffler is on a nearly unprecedented hot streak.

But does the reigning World No. 1 have staying power, or is he simply on a heater like no other?

On this week’s episode of Off Course with Claude Harmon, Butch Harmon offered his take on Scheffler’s future prospects.

“I wouldn’t say he’s the type of player to say that he’s the best driver in the world, he’s the best iron player. What he is, is he’s really good at everything. He doesn’t really have a weakness,” Butch said. “He’s on a run right now that’s unbelievable. It feels like only guys like Tiger Woods get on runs like this. Whether he can continue that, I don’t see any reason why he can’t.

Butch said that there’s plenty of what-ifs and speculation you can invent regarding Scheffler’s game and prospects, but at the end of the day, he and World No. 2 Cameron Smith are the only players in the top 10 who have won a tournament this year.

“Is this gonna happen every week? No,” Butch said. “Let’s just wait and see.”

For more from Butch, including his thoughts on Tiger’s Masters performance and why Rory McIlroy’s final round at Augusta was so significant, check out the full interview below.