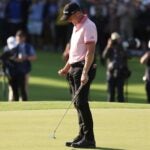 Justin Thomas stares into the hole after making the winning putt at the 2022 PGA Championship.

On Sunday morning, before the first tee shots of the final round of the 2022 PGA Championship were struck by Maverick McNealy and Sepp Straka at 8 a.m. ET, virtually no one was talking about Justin Thomas, except maybe about what could have been.

Despite the fact that Thomas was among the pre-tournament favorites and only three back through two rounds, by Sunday morning few observers predicted a momentous victory, especially since leader Mito Pereira had grown his advantage over the 2017 PGA champion to seven shots.

But by Sunday night, Thomas was the toast of Tulsa as he heaved his second Wanamaker Trophy over his head while photographers lit up the warm Spring evening.

It took a huge effort from JT to get to that point. First, he closed out a gutsy three-under 67 with a clutch finish, and then he took a one-stroke lead into the final hole of a three-hole playoff with rising star Will Zalatoris.

After a solid drive and approach, Thomas was safely on the 18th green in 2, with a Zalatoris birdie highly unlikely. After his mid-range birdie try nestled a foot past the hole, Thomas gathered himself, then tapped in his par putt to complete the historic comeback.

Once the putt dropped into the bottom of the cup, Thomas looked up at caddie Jim “Bones” Mackay and clenched his fist with a look of relief, and perhaps disbelief, covering his face. He was the PGA champion once again.

You can check out Thomas’ winning moment for yourself below.

And here’s a lengthier version of JT’s winning putt and the aftermath: