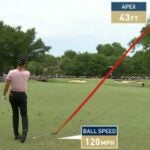 Justin Thomas' shank at the PGA Championship was not an omen for what was to come.

Before Justin Thomas won the PGA Championship, before he found himself in an improbable playoff, before he’d even fully vaulted into contention, he did something else.

There Thomas was, on the 6th tee, staring down a slowly shrinking seven-shot deficit and in dire need of a major championship-winning spark.

The 218-yard 6th was a good place to do it. All week, Southern Hills’ beefy par-3s were some of the highest-scoring holes on the course. If you were a player like Thomas looking to make up strokes on a Sunday, the “short holes” weren’t a terrible place to start.

Thomas pulled his club, surveyed his shot, and made a hard, confident swing. The club was on the ground before he even reached his follow-through.

The damage, according to Shotlink, was severe: a 108-yard shank to a part of the course that wasn’t even mapped.

It was the sort of swing that only seems to come when things are going terribly wrong. But for Thomas, it shortly preceded one of the greatest moments of his career.

Hours after the shank — and ensuing bogey — Thomas tapped-in for par to win the Wanamaker Trophy, his second PGA Championship victory and second-career major win.

In the aftermath of his victory, Thomas’ mind was stuck on a truly remarkable career achievement. Not the major championship … but the major miss.

“I don’t know, it was a bizarre day. I definitely crossed one off the list,” Thomas said wistfully. “I’ve never won a tournament before shanking a ball on Sunday.”

Ever the good sport, Thomas couldn’t help but acknowledge the miss for the millions of CBS viewers who’d tuned into the tournament only to see him win.

“It was the best bogey I’d ever made in my life, that’s for sure,” he said.

Of course, the swing on No. 6 is much easier to stomach in the postscript of a career-defining win than in the doldrums of a gut-wrenching loss. Still, Thomas’ response speaks volumes about him as a competitor. In the seconds following a dramatic victory, his mind was trained on the day’s worst swing.

Ultimately, Thomas leaves with a victory, and one hopes, not a new habit.

“So that was a first, and, man, would I really like it to be a last,” Thomas said.