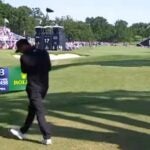 After a wild tee shot, Mito Pereira double bogeyed the 18th hole at Southern Hills on Sunday, denying him his first major title.

TULSA, Okla. — Mito Pereira stood behind the microphone with his hands on his hips and stared straight ahead at the media members assembled in front of him. Fifteen minutes prior, he held a one-shot lead in the 104th PGA Championship. Now, he was explaining where it all went wrong.

With a one-shot lead after 71 holes, Pereira was one hole from glory. All he needed was par to secure his first major championship, and the first for his native country of Chile. The final obstacle was Southern Hills’ brutal 18th hole, a 500-yard monster that played as the most difficult hole of the week.

Driver in hand, Pereira tried to hit a low bullet down the left side of the baked-out fairway. If he caught the proper spot in the short grass, the canted fairway would carry the ball to a flat spot just short of the creek.

As soon as the ball left the face, Pereira knew it was in trouble. The ball started too far right, and the creek running down the right side of the fairway was well in play.

“I wasn’t even thinking about the water,” Pereira said. “I just wanted to put it in play, and I guess I aimed too far right.”

The ball ended up directly in the center of the creek. To win his first major in regulation, Pereira needed to get up-and-down from 190 yards out. There was still a chance.

That long-shot hope was short lived. Pereira flew his approach long of the green, and his ensuing chip couldn’t hold the green. After a two-putt from just off the putting surface, Pereira walked to the scoring tent with a finishing, double-bogey 6 on his card.

Pereira’s team behind the green looked shell shocked. His wife, who was mic’d up by a Netflix crew in hopes of capturing the winning emotions, wiped tears from her eyes. She took off the mic and walked alongside her husband up the hill behind the green. There would be no inside-access to the heartbreak millions had just witnessed.

After a few questions, Pereira stepped off the stage. He hung his head in disbelief, and walked back to the locker room.