WATCH: Jordan Spieth comically makes the most out of a rare wind delay 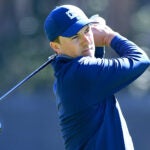 Jordan Spieth during Friday's second round of the Genesis Invitational.

Jordan Spieth widened his stance and opened it up slightly. He looked back, then hit his tee shot. Some seconds later, Spieth laughed with the players and caddies around him.

His ball went about 40 yards up. And about 30 yards forward.

“It is blowing so hard that the players are amusing themselves, hitting these boomerang shots out on the range,” announcer Jim Nantz said during CBS’ broadcast of the third round of the Genesis Invitational.

When you’re a PGA Tour golfer, and life throws you a curveball, you try to hit them. At a little after 10 a.m. local time in Los Angeles, play was suspended due to gusts so great that they blew golf balls off greens at Riviera Country Club, and there was uncertainty whether there would be golf into the afternoon. As they waited out the first wind delay since the 2015 Open Championship, players played around.

Most hit on the range or talked. California kid Max Homa, CBS cameras showed, lay on his golf bag and talked on his cell. Spieth hit into the wind. As did Jon Rahm.

The world No. 2 opened his stance and took a full swing toward the left. His ball went about 50 yards left to right and about 20 yards forward across its 8-second journey.

“It’s so easy to do when it’s howling,” analyst Nick Faldo said on the broadcast. “You could hit a 9-iron, and it would bounce and finish behind you.”