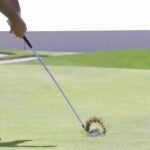 Even DJ hits it fat once in a while.

PGA Tour pros, they’re just like us! Well, at least in one sense. During the third round of the Saudi International on Saturday, Dustin Johnson hit a shot that most of us are all too familiar with: the dreaded duff. But it’s how he followed the mishit that illustrates what truly sets elite players like him apart from the rest of us: he got his next shot up-and-down — for birdie! Here’s how it all transpired:

But from the sound of the broadcast, Johnson was distracted by a noise of some kind, and his one-handed finish position indicates that he was immediately displeased with the shot, which appeared fat at impact, and skidded along the ground, ultimately ending up well short of the green.

Johnson used a short iron for his next shot, which he cozied right up to the hole, setting up what looked to be about a six-foot birdie putt, which he drained. Simple, right?

After his round, Johnson confirmed that it was a camera click that had distracted him. But earlier this week, Johnson conceded that, even as the world’s top-ranked player, he hits more bad shots than people think, and it’s how he recovers from those shots that is truly important.

“I hit some of the worst shots you’ve ever seen,” Johnson said. “But I go find it and hit it again. Obviously not all of them are bad but I do hit bad shots. It’s managing those shots and not letting it bother you and going and hitting the next one good.”

There’s perhaps no better example of practicing what you preach than what Johnson demonstrated during the third round on Saturday. He currently leads the Saudi International by two shots with one round left to play.