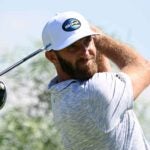 Dustin Johnson holds a two-shot lead with one round left to play at the 2021 Saudi International.

Dustin Johnson is in position for another win at the Saudi International after firing a third-round 66, which launched him to the top of the leaderboard, two shots clear of the field. Here’s a recap of all the action that transpired while you were sleeping.

DJ’s back in control

Johnson has been a dominant figure at the Saudi International, winning the inaugural event in 2019 and finishing runner-up to Graeme McDowell last year. Now, he’s one round away from claiming victory for the second time in three appearances.

On Saturday, Johnson overcame the only blemish on his scorecard in three rounds thus far — a double-bogey 6 on the par-4 14th — with six birdies, including back-to-back red numbers on Nos. 17 and 18. Johnson’s 66 marked his 11th under-par round in a row at the Saudi International.

Though it’s clear DJ is a formidable opponent, another victory on Sunday is by no means a foregone conclusion. There’s plenty of starpower left on the leaderboard.

Tony Finau is only three shots back at 10-under overall and will play the penultimate group alongside Tyrrell Hatton and Andy Sullivan, who are also 10-under. Hatton is a proven winner in the Middle East, having claimed the title at the Abu Dhabi HSBC Golf Championship only two weeks ago.

Sergio Garcia fired the low round of the day on Saturday with a 6-under 64. The 41-year-old has gotten better every day, signing for rounds of 70-67-64, and is currently solo seventh heading into the final round. Stephen Gallacher’s opening round of 62 proved that even lower numbers are out there, and at only four shots behind, Garcia certainly has a chance to make a run on Sunday.

Other notables to watch

Viktor Hovland is four shots back at 9-under; Justin Rose is 8-under; Bryson DeChambeau is 7-under, and Patrick Reed and Phil Mickelson are 3-under.

You can watch final round coverage of the Saudi International on Golf Channel beginning at 5:30 a.m. ET on Sunday.