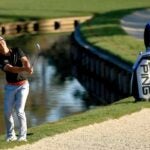 Viktor Hovland shot a two-under 70 on Thursday at the Players Championship.

A rare video review confirmed Viktor Hovland’s claim and reversed a ruling in the opening round of the Players Championship.

Hovland found himself in a rules dilemma on the 11th hole on Thursday morning at TPC Sawgrass, which was his second hole of the day. The 11th is a par-5 where the second (or third) shot needs to carry water and a bunker that guards the front and right edge of the green. A small sliver of grass runs between the long bunker and the railroad ties along the water’s edge.

After finding the fairway off the tee, Hovland had 258 yards remaining for his second. He hit what he called a poor shot that, according to him, “landed in the grass [between the bunker and railroad ties] and kicked right, went in the water.”

That’s where the confusion started.

“When we get up, obviously it’s a small area and I just wanted to make sure that that drop was fine with the guys. And none of them really saw it. So we decided to bring in the rules official and I don’t know what kind of video footage they were looking at, but maybe the camera tower behind the green, and he was saying from his angle it looked like it hit the wood, which was in the hazard, so meaning it didn’t cross, but I was 100 percent confident it did not hit the wood. But as it turns out, in that situation you have to be a 100 percent certain, and when he said that that video footage was not a 100 percent decisive, then I didn’t really have much more of a say. But then luckily someone with [the Tour’s streaming service] PGA Tour Live — or I don’t know who it was — said they had evidence that it hit on the grass and then bounced in and crossed the hazard.”

Before PGA Tour Live clarified the ruling, Hovland was already on his way back farther away from the green to take his drop. That’s when the rules official heard on the radio that the ball actually landed across the hazard and dropped back in the water, meaning Hovland’s drop would be much closer to the hole. (It’s unclear if the video review happened since Hovland was in a featured group on PGA Tour Live or due to more cameras tracking the action with the Tour’s “Every Shot Live” technology.)

“I was pretty confident with what I saw. Still, you know, that kind of makes the — it kind of muddies the situation a little bit,” Hovland said. “… Luckily we then saw the later footage.”

Hovland dropped 49 yards away from the pin between the bunker and railroad ties, chipped it over the green and two-putted for a double bogey, but he still thinks the video-aided ruling helped him.

“Probably saves me half a shot in the long run,” Hovland said. “So it was a pretty big deal, going from hitting a full wedge or full iron shot into that back pin, and if I was able to drop there, which I was, I could just kind of roll something up there. So it was a much easier shot, yeah.”