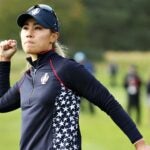 The U.S. Solheim Cup team is beginning to take shape. Nine of the team’s 12 members were finalized at the conclusion of Sunday’s AIG Women’s Open, which was the last event of the qualifying period.

Nelly Korda, Danielle Kang, Ally Ewing, Austin Ernst, Lexi Thompson, Jessica Korda and Megan Khang all made the team via the points standings, and Lizette Salas and Jennifer Kupcho were also named to the team as the two highest-ranking Americans in the Rolex Women’s World Golf Rankings not among the seven qualifiers.

Kupcho, the winner of the inaugural Augusta National Women’s Amateur in 2019, is the only Solheim Cup rookie among the group.

“The last two years have been so long and I’m so happy to finally know who be on Team USA in Toledo,” Hurst said in a release. “This is an incredibly talented group of players, with so much crucial experience to lean on as we work to win back the Cup. I’m excited for the opportunity to lead this team and can’t wait to finally get to Inverness.”