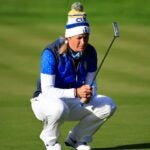 Suzann Pettersen will have a chance to add to her Solheim Cup legend as she captains Team Europe in 2023 in Spain.

Suzann Pettersen’s playing career ended in storybook fashion at the 2019 Solheim Cup as she holed the clinching putt for Team Europe to ride off into the sunset on the top of the sport. Soon, she’ll have a chance to add to her Solheim Cup legacy — this time as a captain.

Pettersen will lead Team Europe in 2023 at Finca Cortesín Golf Club as they look to win the Solheim Cup for the third time in a row. The 40-year-old was announced as Team Europe’s captain during a press conference in Spain on Monday.

“I am simply thrilled to be named Solheim Cup captain,” Pettersen said. “This is the biggest honor of my career.”

The two-time major champ follows in the footsteps of Catriona Matthew, who became the first European captain to win the Solheim Cup twice after steering Team Europe to victory earlier this year at Inverness Club. Pettersen was a member of Matthew’s first victorious team at Gleneagles, winning two points for Team Europe in Scotland.

Pettersen made nine appearances in the Solheim Cup as a player, and four times came out on the winning side. Her career Solheim Cup record in 36 matches sits at 18-12-6.

“My best golfing memories are from the Solheim Cup,” she said. “You are out there with your teammates, your friends, and you all work for one goal. You fight for your friends and you share incredibly precious moments.”

Team USA has not yet named its next captain.