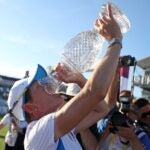 While I trekked about Inverness Club last week, I made sure to keep an eye out for anything interesting that couldn’t be seen on TV.

Last week’s Solheim Cup was everything we could’ve hoped for as Team Europe delivered a spirited 15-13 win on foreign soil to take the Cup back across the pond. And while the event set a record with 130,000 fans for the week, most people who watched it did so via the broadcast.

I watched a bit of the broadcast in the media center while writing, but I tried my best to spend as much time as possible on the course. While I trekked about Inverness, I made sure to keep an eye out for anything interesting that couldn’t be seen on TV.

Here are some of the things that I saw, heard and learned at the Solheim Cup.

For each match at Inverness, there was a group of flag bearers following along with red and blue flags. Once shots were hit into the fairway, rough, bunker, etc., they would walk over and hold the corresponding flag in the air. It might seem trivial, but it made the live viewing experience MUCH easier. No more guesswork on whose ball was whose, or where a ball was when it was not visible from outside the ropes. This should be standard at every golf tournament.

Like most tournaments, the Solheim Cup had plenty of young fans seeking autographs from the stars of the show. However, unlike many events, there likely weren’t many fans who went home empty handed. Every time a player came off the 18th green, they took time to sign autographs and take pictures with adoring fans. Lexi Thompson was particularly popular among the masses, and she took time to make sure she signed just about every item shoved her way. And the look on little girl’s faces when they got that signature? Priceless. These women were great ambassadors to the game.

Speaking of autographs, there were a few well-served patrons who had some interesting items to get signed. One fan made it his mission to get as many players as possible to sign his beer can. When I saw him coaxing Austin Ernst into giving her John Hancock on the empty vessel, he had quite the collection going. But worry not, he made sure not to allow his mission to interfere with the kiddos surrounding him. “Make sure you get to all the kids first, Austin. I’m just being silly.” Well done, sir.

The 9th hole at Inverness (18 for member play) might be my favorite hole I’ve ever seen. The tee shot is visually daunting, and if you don’t find the fairway, it makes the approach extremely difficult. Although the approach shot will be short, the green complex is guarded by deep bunkers and a steep runoff to the right. The contours of a golf course are tough to discern on TV, and the 9th is a prime example of that. TV does not do justice to this Donald Ross gem.

I’ve been a part of plenty electric sporting events over the years, but it’s not hyperbole when I say the 1st tee of the Solheim Cup was the coolest experience of the bunch. Maybe it’s the fact that noise like that isn’t common on the golf course, but I was ready to run through a brick wall on my walk back to the media center after the opening tee shots Saturday morning. Team golf atmospheres are the best, and Inverness did it right. Well done, Toledo.

Danielle Kang didn’t have her best stuff in Toledo, evidenced by her 1-3-0 record, and after her Saturday foursome loss, she was out on the range grinding through a bag of balls. Being the intrepid reporter that I am, I wandered out to watch and try to see if I could figure out what she was ironing out. I kept my distance and took some videos from the shade while she and her caddie worked. But when Kang noticed me in the distance, she instructed her caddie to ask me to leave, so I took the opportunity to go cool off in the media center. We were both just trying to do our jobs, and sometimes that puts us at odds. Here’s to hoping she has a strong finish to the season.

7. Whispers in the ear

Many fans and media members walked around with chunky earpieces around their necks or in their ears all week. These contraptions were synced up with the broadcast audio, so it was easy to get a sense for what was happening throughout the course without having to pull out your phone every 15 minutes. Another bonus was that they had no delay, so if you were watching the action in front of you, there was also a good chance you had Terry Gannon and Judy Rankin in your ear commentating along to it. These radios are not a new invention, but this was my first experience with them. Count me as a big fan.

Inverness went through a major renovation/restoration throughout the last decade, and among the changes they made was to remove many trees around the property. This gave the course some spectacular views, but it also made for a much more spectator-friendly course. Plenty of holes visible from from other holes, and if you find the right spot, you can watch a lot of golf without ever having to move. Prime example — the hill between 16 fairway and 17 green. Plop yourself there and you can see 15 green, 16 tee box and 17 fairway and green. It was the perfect spot to grab a seat and rest the legs for a bit without missing much.

Marshals usually tote around signs that say “Quiet please” to hold up while players hit. At the Solheim Cup, those signs were a little different. Instead, they read “Get loud!” Whenever there was a good shot or a big putt, the marshals would use these signs as a reminder for the crowds to bring the energy.

After a strong performance on Sunday, Team USA was a team on a mission for the singles matches. And the crowd responded in kind. The first tee shots on Friday were electric, and the atmosphere Monday afternoon might’ve matched it. It was standing room only in the bleachers, and fans were at least five deep on the ropes down either side of the fairway. Hard to beat that kind of excitement.

Among the hundreds of thousands in the crowd were the members of the Junior Solheim Cup teams, who competed earlier in the week at nearby Sylvania Country Club. Those lucky juniors got prime seats on the 1st tee box, and inside-the-ropes access throughout the week. The young Europeans were among the only fans the ladies in blue had on site, but when that winning putt dropped, they screamed the cheers of an entire continent.