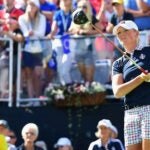 Stacy Lewis has already played in four Solheim Cups as a player, and now she'll have a chance to lead Team USA as the captain.

Stacy Lewis is among the most decorated American players in women’s golf of her generation, and soon, she’ll have a chance to add to that legacy. On Wednesday, Lewis was named as the Solheim Cup captain for Team USA in the upcoming competition to be held in Andalucía, Spain.

Lewis will lead the American side at Finca Cortesín Golf Club as Team USA looks to win the match for the first time since 2017. The 36-year-old has served as an assistant captain for the last two Solheim Cups.

“To be named captain for the USA Solheim Cup Team is an incredible honor and I’m beyond grateful to the Committee for choosing me,” Lewis said. “I have so many amazing memories from my years on the team and the two opportunities I’ve had to work alongside the team. I absolutely love the Solheim Cup and I want 2023 to be as great an experience for my team as my years wearing Red, White and Blue have been for me.”

The two-time major champ follows in the footsteps of Pat Hurst, who led the Red, White and Blue at Inverness Club last summer as Team USA fell 15-13 to the European side.

“I have learned so much from the past captains on the Solheim Cup Committee, and the fact that they chose me to lead this team is one of the proudest moments of my career,” she said. “I’m more than ready to step into this role.”