3 things to know from Tuesday at the 121st U.S. Amateur 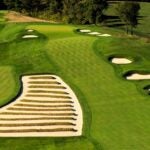 Oakmont Country Club has proven to be a formidable test.

OAKMONT, Pa. — Two days are complete at the 121st U.S. Amateur, and there’s plenty of action to get caught up on. Here are three things to know from Tuesday.

After a sweltering opening round at to begin the championship, the second day of competition was marked by gray skies and showers. The morning went off without a hitch, but just as much of the first wave was closing their rounds, the skies opened, and the rains began.

Officials suspended play at 1:34 p.m. local time and the delay lasted nearly four hours. Players were briefly sent back on the course shortly after 3 p.m. but were pulled back off the course before play could officially resume with severe weather still in the area.

Play was called for the day at 8 p.m. and the second round will continue Wednesday morning at 7:30 a.m. with a playoff for the final spots in the match-play bracket beginning no earlier than 12:30 p.m. The round of 64 will begin no earlier than 12:45 p.m.

2. Steady as she Goetz

Mark Goetz fired one of the lowest rounds of the day on Monday with a 64, and he carried that momentum into his second 18. Despite playing the considerably more difficult Oakmont Country Club in Round 2, Goetz is three under through 12 holes and has yet to make a bogey this week. His nine-under total leads the 312-player field thus far.

“I played really well today,” Goetz said. “It was definitely an advantage being out here after all that rain came through, but it was a long day.”

However, with Goetz six holes short of completing his second round, Brad Reeves is the official clubhouse leader through two rounds. Reeves followed his opening-round 65 with an even-par 70 in Round 2 and is five under for the championship.

Although the match-play bracket will not be finalized until early tomorrow afternoon, there are some players who already know their fate. Among them are two of the top players in the world in Keita Nakajima and Ludvig Aberg.

Nakajima, the No. 1-ranked amateur in the world, finished 11 over through 36 holes and will finish well outside the cut line, while Aberg, the No. 3-ranked amateur will suffer the same fate after finishing at eight over.

Second-ranked amateur Pierceson Coody was also paired with Nakajima and Aberg, but his future is far less clear. The University of Texas standout rallied to shoot a one-under 69 on Tuesday at Oakmont to finish four over. He will be scoreboard watching throughout Wednesday morning to learn if it will be enough to advance to the knockout rounds.