Viewer’s guide: Here’s everything you need to know about the 2021 U.S. Amateur 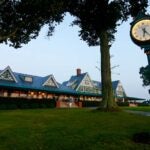 The best amateurs in the world head to Oakmont Country Club this week.

The summer of USGA championships rolls on this week in Pennsylvania as some of the best in the world compete at the U.S. Amateur. Here is everything you need to know about the event.

Ollie Osborne: The SMU rising junior heads back to the U.S. Amateur after a run to the championship match last summer. With Tyler Strafaci turning pro, Osborne is the highest finisher from last summer’s championship in the field.

Keita Nakajima: The No. 1-ranked amateur in the world arrives at Oakmont after a win at the Japan Amateur Championship earlier this summer. He’s back competing on U.S. soil for the first time since 2019, but if his results in Japan are any indication, he should be the man to beat. Nakajima has two top 10s on the Japan Tour this year, showing he can hang with anyone.

Ricky Castillo: Castillo was a star in the spring at the Walker Cup, and he should carry that momentum into the U.S. Am. He recently finished fifth at the Western Amateur and he also finished in the top 15 at the NCAA Championships. A deep run for Castillo would surprise no one.

A massive field of 312 competitors will tee it up over two days of stroke play, with the field size reduced to 64 after 36 holes. From there, the top 64 compete in a single-elimination match-play tournament. A 36-hole championship match will decide who lifts the Havemeyer Trophy on Sunday.

While Oakmont Country Club is the headlining course for the U.S. Amateur, nearby Longue Vue Club in Verona will serve as a co-host for stroke play. Oakmont has hosed 17 USGA championships over the years, including nine U.S. Opens, most recently in 2016 when Dustin Johnson won his first major championship.

Live coverage will not be available for the stroke-play portion of the event but starting on Wednesday you can catch all the action on NBC’s various platforms. (All times ET)