2020 Travelers Championship live coverage: How to watch Round 2 on Friday 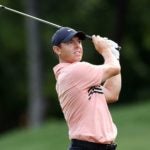 The 2020 Travelers Championship got off to a strong start on Thursday, and now the Tour’s top competitors return for another 18 holes on Friday to determine who will play for the title over the weekend. Here’s everything you need to know to follow Friday’s action live.

Without a doubt, the best performance at TPC River Highlands on Thursday was authored by Mackenzie Hughes. Hughes fired an incredible 10-under 60 in the opening round and even stared down a putt for 59 on his final hole. The Canadian pro, who has one PGA Tour win on his resume, will have an afternoon tee time for Friday’s second round, and he’ll once again play alongside Fabián Gómez and Sam Ryder.

But Hughes wasn’t the only player to go low on Thursday. World No. 1 Rory McIlroy will be chasing the lead in the second round after carding a 63 on the opening day. Both of his playing partners, Phil Mickelson and Bryson DeChambeau, will be in the mix as well. Mickelson is one back of McIlroy after recording his best round in months on Thursday. DeChambeau shot a 65 in the first round. That trio tees off at 12:50 p.m. ET.

Here’s what you need to know to watch the second round of the Travelers Championship on TV or online.

How to watch Travelers Championship Round 2 on TV

Golf Channel will broadcast the action for the second round of the 2020 Travelers Championship. They will air three hours of coverage from 3-6 p.m. ET on Friday.

How to stream Travelers Championship Round 2 online

For golf fans with a cable subscription, streaming the 2020 Travelers Championship online will be easy. You can catch the full second round Golf Channel broadcast on golfchannel.com. Fans can also view Featured Group coverage of the second round all day Friday via PGA Tour Live, though you will need an account to access the stream.

2020 Travelers Championship tee times for Round 2 (All times ET)