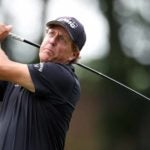 Phil Mickelson is in contention after his first round at the 2020 Travelers Championship.

Phil Mickelson, newly eligible for the senior circuit after celebrating his 50th birthday on June 16th, has no plans to retire to the PGA Tour Champions anytime soon — and for good reason.

Lefty fired his best round in over four months, signing for a first-round score of 64 at the Travelers Championship. The last time Mickelson shot a round of six under par or better was at February’s AT&T Pebble Beach Pro-Am, when he signed for a second round of seven-under-par 64. That round helped him get into contention, but he sputtered to a final round of 74 and ended up in solo third, five shots behind eventual winner Nick Taylor.

Mickelson carded six birdies on Thursday in Connecticut, and perhaps more remarkably, zero bogeys. The Travelers is Mickelson’s second tournament back since the PGA Tour’s restart. He also played the Charles Schwab Challenge in Fort Worth, Texas, but missed the cut after firing rounds of 69-71.

Posting a low number in the opening round of the Travelers bodes well for Mickelson’s prospects this week, as he has missed the cut in his last three Tour starts. Mickelson teed off in the morning wave at the Travelers and was tied for third as the afternoon players began their rounds.