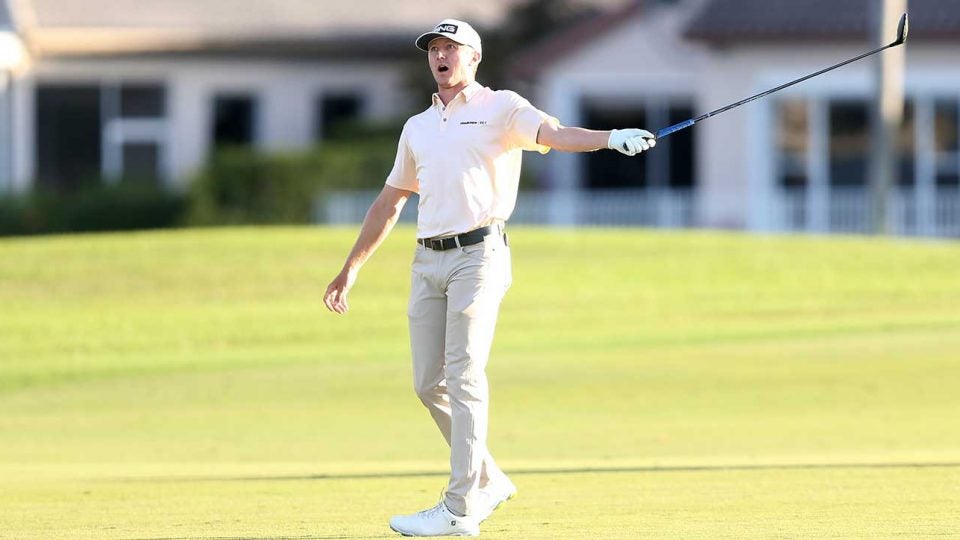 Mackenzie Hughes watches his second shot on the 18th hole sail into the grandstands at the Honda Classic on Sunday.
Getty Images

Mackenzie Hughes needed a big shot coming down the stretch. He got a big break instead.

Hughes, a 29-year-old Canadian who has struggled since winning for the first time on Tour in 2016, was one back of playing partner Sungjae Im with just the par-5 18th remaining at the Honda Classic on Sunday. A birdie would have put the pressure on Im, and an eagle would have all but guaranteed a playoff, if not a victory.

Hughes found the fairway with his drive and then took a big swing from 254 yards out — only to have his ball hook badly into the grandstands left of the green. But turns out it was a good miss for Hughes, especially since missing right would have meant a water ball.

Despite his ball coming to rest somewhere in the grandstand, Hughes was allowed to take free relief under Model Local Rule F-23, Temporary Immovable Obstructions. That meant he got a drop and had 72 yards remaining, and he even had a great angle. 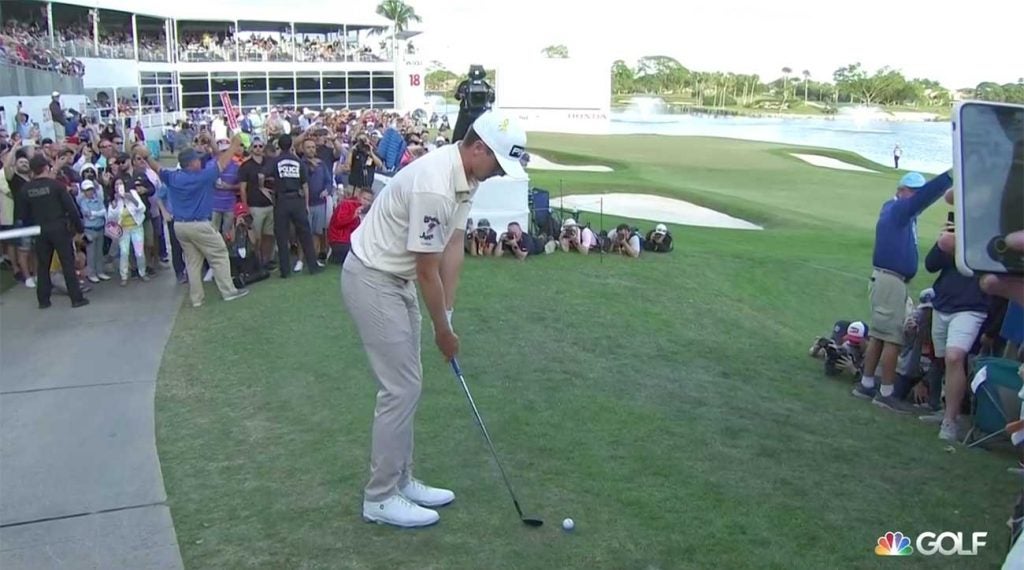 A look at Mackenzie Hughes' third shot on 18 on Sunday.
NBC

Still hitting just his third shot, Hughes pitched it to 21 feet but missed his birdie putt, which would have forced a playoff. He made his par and signed for a four-under 66, which turned out to be good for a solo second-place finish and $763,000 check, his biggest since he earned $1.08 million for winning the RSM Classic in 2016.

“It’s a tough shot,” Hughes told reporters afterward. “Wind is in off the right, and you’re trying to cut one but you can’t over-cut it because then you’re going to be knocked down by the wind. I was grinding my butt off … but I had so much fun this week.”

While Hughes’ miss into 18 could have been worse, the same can’t be said for the final pairing of Tommy Fleetwood and Brendan Steele. Steele needed an eagle to catch Im and Fleetwood needed birdie, but both of their comeback dreams were dashed when they missed right with their second shot and found the water. Both made bogeys.

Give Hughes credit for a big week, though. Even without the grandstand to help on 18, he still would have had one of his biggest weeks of the season, in which he’s made just three of 12 cuts.

“It’s been a really tough season so far for me. I knew I was never really that far off, but it’s all results, and the results weren’t good so far this year. I always believed I could do it, but until you do it and get yourself back in there, there was always that bit of doubt,” Hughes said. “This golf course I knew would bring out my best because it’s just such a grind, and you just have to hang in there, just hang in there and hang in there. I mean, I just fought my butt off all weekend. Yeah, it was a lot of fun to be back in the mix, though.”

This isn’t the first time a pro has benefited from a generous break off the grandstands, and some have even admitted to it. In March of last year at the Maybank Championship in Malaysia, Scott Hend hit a low shot through the trees that banked off a grandstand behind the green and back onto the putting surface, leading to an easy two-putt par. He admitted he played it that way and won the tournament a day later. The R&A, to its credit, had a clever fix for this situation at last year’s Open Championship at Royal Portrush.