2020 Travelers Championship live coverage: How to watch Round 3 on Saturday 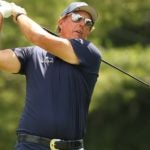 Phil Mickelson holds the solo lead heading into the weekend at the Travelers.

The 2020 Travelers Championship forged ahead Friday in Connecticut as the field made their final push to make the cut. Scores were once again low at TPC River Highlands and birdies were aplenty. Here’s everything you need to know to follow Saturday’s live action.

Even at the ripe age of 50, Phil Mickelson still has some serious game. Mickelson opened the championship with a round of 64 and followed it up with a 63 Friday to take the solo lead heading into the weekend. He’ll tee it up in the final grouping alongside Will Gordon and first-round leader Mackenzie Hughes on Saturday. The 23-year-old Gordon is less than half Mickelson’s age and has fewer starts on the PGA Tour (eight) than Mickelson has wins (44). The former Vanderbilt standout opened the tournament with rounds of 66 and 62 and trails by a shot heading into Round 3. Hughes cooled considerably on Friday after his opening-round 60, posting a 2-under 68. The trio tees off No. 1 at 9:15 a.m. (ET).

Here’s what you need to know to watch the third round of the Travelers Championship on TV or online.

How to watch Travelers Championship Round 3 on TV

Golf Channel and CBS will split broadcast duties on Saturday at the Travelers. Golf Channel will take early coverage from 8:50 a.m. to 10:50 a.m. CBS will then broadcast during the afternoon from 3 to 6 p.m.

How to stream Travelers Championship Round 3 online

For fans with a cable subscription, they can log on to golfchannel.com to stream the action. Fans can also view featured group coverage of the third round all day Saturday via PGA Tour Live, though you will need an account to access the stream. CBS will also stream the action from 10:50 a.m. to 3 p.m. on CBSsports.com.

2020 Travelers Championship tee times for Round 3 (All times ET)