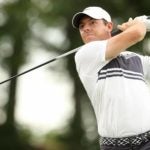 The first two rounds of the 2020 Travelers Championship are in the books, and 50-year-old Phil Mickelson leads by one shot over Will Gordon and Mackenzie Hughes after firing rounds of 64-63, bringing him to 13 under par overall. It’s the second-lowest 36-hole total of Mickelson’s lengthy playing career, surpassed only by the 2013 Waste Management Phoenix Open, when he opened with rounds of 60-65. Mickelson went on to win that tournament by four shots.

Because inclement weather is expected on Saturday afternoon, the field will tee off in threesomes off of split tees from 7:15-9:15 a.m. ET.

Mickelson will begin his third round in the final grouping at 9:15 a.m. ET alongside Hughes and Gordon, who both trail Mickelson’s lead by one shot at 12 under par overall.

Xander Schauffele, Brendan Steele, and Rory McIlroy will comprise the penultimate pairing, teeing off at 9:04 a.m. ET. All three players are at nine under par overall, four shots behind Mickelson’s lead.