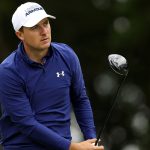 Jordan Spieth will vie for the career grand slam for the fifth time this week.

Nothing is a given week-to-week on the PGA Tour, but one thing seems to be a given this year: Jordan Spieth is not going away.

In his first tournament since the Masters, he called himself rusty, was a bit disappointed in his putting and shot 71 on Sunday to back off from contention. And yet, tally it all up and there he was finishing in the top 10 for the seventh time in his last nine starts. During a year in which all the game’s best have been up and down, Spieth has somehow been the most consistent.

For the second time this year, a Spieth performance in Texas will serve as the fuel for water cooler discussions (remote or in-person!) entering a major championship. Last time it was at Augusta National, where he quietly grinded out a T3 finish. This time it’s prior to Kiawah Island and the PGA Championship, where he has a chance to accomplish the career grand slam of major victories. If it happens he’ll be just the 6th player to win the modern slam, cementing himself as the clear cut best player of this post-Tiger generation.

Are you giddy yet? Don’t get too excited — he’s just one of 156 in the field — but let’s ask the same question we asked a month ago in Georgia: is there anyone you’d take over Spieth right now? Was Rory in Charlotte everything you needed to see? Is Dustin Johnson the king until someone else is ranked no. 1 in the world? Or has Spieth legitimately been the best player in the world in 2021?

His performance this week followed a 4-week absence due to his contracting Covid-19 after the Masters, and if we’ve learned anything about the virus, it’s that it affects everyone differently. Spieth experienced fatigue and typical symptoms for about a full week in late April, so it hit him even harder than a lot of healthy 27-year-olds. Returning to form (or simply maintaining it) quickly was no guarantee.

“I was planning on continuing to play,” Spieth said Tuesday. “I wasn’t planning on taking a month off in the spring. So at this point it’s get back to playing golf and try and get in the same rhythm I was in and just kind of be patient with it.

He was real patient alright, carding a nine-under first round for a share of the 18-hole lead, exciting the Spieth loyalists all over TPC Craig Ranch. When he gave up that lead during a ho-hum second round, Spieth pounced again on the easy track and shot 65 on Saturday, pushing himself back into contention, a move we’ve seen him make a handful of times already this season. It’s amazing how quickly we can forget about someone when they simply take a few weeks off.

The Golden Child himself was quick to point out it’s been a long time since he played really well at the AT&T Byron Nelson. Prior to this week, his best finish came in 2010 when he was a rosy-cheeked 16-year-old. He’s now played the event 10 times, and this was somehow his first career top 10.

After his final round he was asked about the week he completed, per usual, but perhaps most importantly he was asked about the week coming up. It’ll be his fifth chance to finish off the career grand slam, and possibly his best opportunity yet to pull it off. That is, if you believe in the analytics. DataGolf ranked Spieth as the 18th-best player as of last week due to the incredible trend line he’s established thus far in 2021. He’ll probably jump up to 15th as of Monday morning.

Further proof that Spieth never left anything but our television screens was that his game this weekend was exactly like his game has been all season long: stupendous with his irons, quite good around and on the green, and average off the tee. That’s the Spieth formula and it damn near worked again in his home state. If anything, he said, he’ll be putting in some time with the flat-stick early this week.

“Sometimes just takes a couple putts early in a round and the lid comes off for the whole week. Hopefully that’s how it is.”

Pit all of that against the fact that Spieth has never even stepped foot onto the property at Kiawah Island. When he did an interview with No Laying Up just a few weeks ago, Spieth wasn’t even sure of the type of grass that make up Kiawah’s greens. He’ll be studying up plenty Monday, Tuesday and Wednesday at the Ocean Course. It’s going to take at least 27, and perhaps even 36 holes, he thinks. Is it even possible for him to be the favorite if he’s never even felt the wind whipping off the Atlantic Ocean at that treacherous property?

We’ll repeat the question again: is there anyone you’d take over him right now?