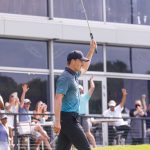 Jordan Spieth on Saturday after his eagle on the 18th hole at TPC Craig Ranch.

Jordan Spieth raised his putter with his left hand, pumped his right fist, then lifted his putter again. In front of fans in his hometown of Dallas, at a tournament he’s attended since he was a kid, after a 30-foot eagle putt from off the green on the 18th at TPC Craig Ranch, the celebration was, arguably, the least he could do. He knew it, too. For a second of his ball’s six-second journey to the hole on Saturday, he considered the most.

“Once it got on the green, it looked good,” Spieth said afterward. “Started the putter raise and I wasn’t positive it was going in because the angle it was coming in at. I wanted to do the no-look to the crowd, but, I mean, it was a really cool moment.”

That’s without a doubt. The putt on the 509-yard par-5 places him three shots behind leader Sam Burns entering Sunday’s final round of the AT&T Byron Nelson. It puts him in line to win for the second time this year, and second time in three starts, after having not won since 2017. It gives him a chance to fly to next week’s PGA Championship, the one major that he has not won, with a victory.

The putt, or at least the stance he took over it, was also one-round old.

Dissatisfied after his second round, Spieth went to the practice green. He widened his stance a touch. He bent over a hair more. “Kind of got me a little more, like, open, like eyes open to the target versus feeling closed, and that, for me, if I feel more of a left bias, I putt a lot better than trying to save it,” he explained. Spieth went to the 1st tee Saturday.

He’d then three-putt 5, one-putt seven holes and three-putt the 16th.

“I trusted it early,” Spieth said. “Actually trusted it the whole round, but it was a new — I opened up a little bit and got worried on a couple missing left, so I ended up pushing them right.

“So it’s just stuff that comes with more reps. That’s really all it is. The rest of the game is really solid. It’s just kind of if I was putting as well as I do in tournaments that I win, we would have a number of strokes better right now.”

Though it’s hard to get much better than the putt on 18. Celebration excluded.

“It’s always fun to have — especially in Dallas, but anywhere — just to get the roars and feed off of them,” Spieth said. “Maybe some confidence into tomorrow.”