The Safeway Open gained some serious buzz when sponsor’s exemption Tony Romo shot a round of two-under-par 70 on Thursday, putting him in position to make a run at the cutline on Friday.

Did he do it? Scroll down for everything you missed from Friday’s action at Silverado’s North Course in Napa, Calif.

Bryson DeChambeau charged into the lead on Friday, firing a sizzling round of eight under par that featured eight birdies and not a single bogey. DeChambeau’s second-round 64 combined with his first-round 68 brings him to 12 under par overall, and two shots clear of his nearest rival, Nick Watney, who is in solo second at 10 under par.

DeChambeau is seeking his sixth PGA Tour victory since 2017. 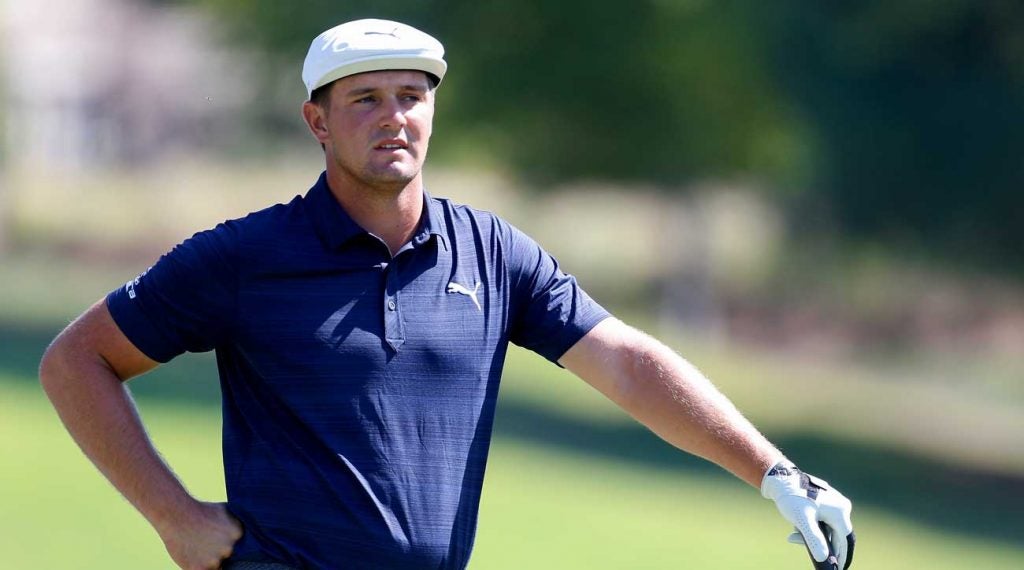 Accessories
Gotta have it: 3 pieces of technology Bryson DeChambeau can’t live without
Justin Thomas and Collin Morikawa also lit it up

After a slow start on Thursday, JT put the pedal to the metal — and hasn’t looked back. Thomas was three over par through his first 10 holes during Round 1, but caught fire on his back nine, going four under on his final seven holes to finish with a 71, one under par overall.

He continued his forward momentum on Friday, shooting 31 on his first nine (the back side) and 33 on his second nine (the front) for a round of eight-under-par 64 that included nine birdies and a single bogey. Thomas is currently nine under overall.

Morikawa also had a slow start on Thursday, with two birdies and two bogeys en route to an even-par 72. The 22-year-old star had a blemish-free scorecard on Friday that featured eight birdies. His round of eight under par in Round 2 brings him to eight under par overall.

It looks like Romo will be able to make his regular Sunday gig after all.

The NFL color commentator for CBS was hoping he’d be teeing it up this weekend after firing a stellar round of 70 on Thursday, but it would mean he’d have to follow up with another strong round on Friday in order to make the cut. Romo fought hard, carding back-to-back birdies after suffering two bogeys in his first three holes, but alas, golf is hard, and a further string of six bogeys in eight holes sealed his fate. Romo shot six over on Friday to finish at four over par overall, missing the cut by six shots.

QB on target. 🎯@TonyRomo is battling to make the cut @SafewayOpen, currently 3 shots back of the projected cutline. pic.twitter.com/ZN5hPT7fwS

News
Move over, Charles Barkley! From Steph to Smoltz to Romo, celebrity golfers are now actually…really good
Are any other big names in the hunt?

Yesterday’s co-leader, Adam Scott, is now six back after a disappointing second round of one-over-par 73.

Francesco Molinari is five back after firing a second-round 71, and Patrick Cantlay is eight shots back after shooting 69-71.

Travel
Here’s how to take a romantic golf getaway to Silverado for less than $3K
Did any big names miss the cut?

Phil Mickelson shot three under on Friday, but it wasn’t enough to save him from his rough first-round 75. Kevin Na, Charley Hoffman, Hideki Matsuyama, Jason Dufner, Pat Perez, John Daly, and Tony Romo will also miss weekend play at Silverado.