‘I don’t go into their room’: Jordan Spieth has a home game and houseguests this week 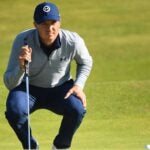 Jordan Spieth has company this week in Dallas.

Jordan Spieth is happy to have houseguests this week. He just hopes they don’t regret it when they have to commute during rush hour from TPC Craig Ranch in McKinney, Texas, to his place in a different Dallas suburb.

Spieth, a Texan, is basically royalty this week at his hometown AT&T Byron Nelson. But with the tournament in his backyard he also has company. The Spieths, who welcomed their first child, a son, Sammy, in November, are hosting Jason Dufner and his girlfriend as well as Justin Thomas, his fiancee, and their dog.

Thomas and Spieth also played Southern Hills in Tulsa, Okla., on Monday, which is hosting the PGA Championship next week.

“I think in an ideal world [Thomas] would stay closer to the course, but I think he would have felt too guilty not staying at our house since we live here,” Spieth said on Wednesday. “So that’s kind of, he didn’t say that, but that’s probably how, you know, when he’s driving home at rush hour I think he’s probably like, ‘Man, you know, alright, I guess we got to go back there.'”

Having roommates during a tournament week isn’t really new for this group, but it’s not often it happens at their own house. Thomas and Spieth stay together for more than half the tournaments a season already, Spieth says, so this won’t be too different.

“It’s nice hanging out at night,” Spieth said. “Get to kind of show him around Dallas a little bit and eat some good food and then we’ll go on next week and do the same thing.”

Spieth joked he’ll lean on Thomas for babysitting help — “maybe that will wear him out a little bit for the week” — but added he had nothing bad to say about his guests. Yet.

“I don’t go into their room, so, no, he’s very clean, they’re great houseguests,” Spieth said. “I’ve got no complaints thus far, but it’s only Wednesday, so ask me later in the week.”