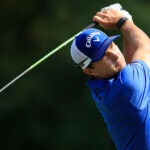 Kevin Kisner is playing four rounds this week at East Lake Golf Club’s 7,346-yard, par-70 golf course. The tees are from the tips during the Tour Championship. The greens are genuine. The pins are problematic. The rough is rough.

He’d give the slightly-better-than average player, a 12 handicap, slightly worse than his average score on the PGA Tour this year (70) over those four rounds in a match.

(Would you take it?)

In a video posted to the PGA Tour’s Twitter account this week, Kisner was asked how many strokes he’d spot the 12 handicap at the start of a 72-hole tournament “to make it fair.” He thought about it for 2 seconds.

“Sixty-eight,” he said with the straightest of faces.

He explained his number in four seconds.

Earlier this year, Kisner did take on four non-pros from the tips. Sort of. Barstool’s Fore Play squad played as a four-man scramble against Kisner at Pinehurst No. 2 for charity. Fore Play won on the 18th hole.

Also earlier this year, Lou Stagner, part of data-driven DECADE Golf, tweeted that the average Tour pro had a handicap index of +5.4 between 2016 and this year. Tiger Woods’ peak index, Stagner also reported, was +9.3 in 2008.

Kisner also quickly explained how he was able to quickly figure out the strokes.

“It’s all I do all day for a job,” he said. “Walk from my yardage sprinkler and do math. Pretty good at it.”