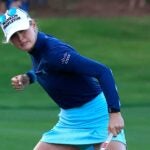 Jessica Korda celebrates her winning putt on Sunday during the Diamond Resorts Tournament of Champions.

Check in every week for the unfiltered opinions of our writers and editors as they break down the hottest topics in the sport, and join the conversation by tweeting us @golf_com. This week, we discuss Tiger Woods’ surgery, Tyrrell Hatton’s victory in Abu Dhabi, the Korda sisters, Mark Hubbard’s unique putting stroke and more.

1. Tiger Woods, on Tuesday, announced he was undergoing his fifth back surgery, a microdiscectomy procedure to remove a pressurized disc fragment that was leading to nerve pain. In a statement, he said: “I look forward to begin training and am focused on getting back out on Tour.” But he did not say when he might return. Close friend Notah Begay said on Golf Channel that Woods became concerned when his clubhead speed was dropping. Perennial question: Where does this latest surgery rate on the worry-o-meter?

Josh Sens, senior writer (@JoshSens): On a scale of 1-10, I’ll give it a 5. Certainly not a major setback compared to what Woods has been through. Seems like a relatively minor cleanup job. With the caveat that the only minor surgery is surgery that happens to someone else.

Michael Bamberger, senior writer: I think the worrisome thing is that there’s this thing and then what’s next? And that’s a tough way to live, knowing there’s always likely to be another surgery for another problem. It’s tough. Going from 15 to 16 is like looking up the face of K2. Going from 82 to 83 is not as daunting, but getting that 16th major just seems like such a daunting task, in every way. But never bet against Tiger Woods.

Sean Zak, senior editor (@sean_zak): I think there’s a limit to how many microdiscectomies one can have before your back is un-golf-able, and Tiger is now closer to that limit. Recall that these surgeries of the past were just patchwork, healing Tiger for the temporary. He can’t get fused again, I presume, so my worry-o-meter is closer to 7.

Dylan Dethier, senior writer (@dylan_dethier): Team Tiger hasn’t exactly been transparent about his health in the past, but I do trust what Rory McIlroy offered earlier this week about Woods already being back hitting balls at the range. I don’t think this surgery in and of itself changes anything, but it certainly serves as a reminder of Woods’ tenuous health. I’ll go with a 5 for the sake of career achievement in surgery.

2. In the past 14 months, Tyrrell Hatton has won the Turkish Airlines Open; the Arnold Palmer Invitational; the BMW PGA Championship, the Euro tour’s flagship event; and, on Sunday, the Abu Dhabi Championship. Is Hatton the most dangerous player in golf right now?

Sens: Not as long as Dustin Johnson is still walking the planet.

Bamberger: No, but he is most underrated. Until all those wins were put together in one sentence rich in semicolons, I had no idea.

Zak: He’s dangerous in the sense that we won’t take him totally seriously … and then he’ll bag another big victory. Could he win the Masters? TOTALLY. And then he’d seem even more dangerous. But as Sens said, DJ owns that title until he finishes outside the top 20 in any big event.

Dethier: Hatton is among the 10 most dangerous players in golf right now, which seems like a high level of danger. There are still times that Hatton doesn’t seem wholly comfortable — he missed cuts at all three majors in 2020 — but hoo boy, when he’s in the zone, flagsticks get scared.

3. Among the players Hatton beat in Abu Dhabi was Rory McIlroy, who led by one going into the final round only to do something we’ve seen time and again from him in recent months: come up short on Sunday; McIlroy shot an even-par 72 that left him five back off Hatton, in solo third. Meanwhile, at the American Express, in Palm Springs, 54-hole co-leader Tony Finau, who also has struggled to close out events, shot 68 to finish four back of Si Woo Kim. (Finau’s fourth-round score was two worse than that of any other player who finished in the top five.) See any similarities in this duo’s Sunday struggles?

Bamberger: I would agree. To paraphrase Bob Jones, there’s Thursday, Friday and Saturday golf, and then there is Sunday golf, and it is not at all the same thing.

Zak: I definitely do not want to equate the two. Finau can’t get it across the finish line anywhere. Rory contends so much he’s going to struggle to seal the deal at times. He’s probably thinking about it a good bit. I’ll get worried if he doesn’t win by summertime.

Dethier: What’s most similar about their Sunday struggles is that they’re generally still playing solid, if unspectacular, final rounds of golf — and getting beaten by ridiculous performances by other golfers. It would be easier to criticize these guys if they were shooting, like, 79 every Sunday. But Finau shot 68 this afternoon! He’s hardly going to change careers anytime soon.

4. A day after shooting 60 (!) at the LPGA’s 2021 season opener, the Diamond Resorts event, Jessica Korda fired a fourth-round 66 to advance to a playoff, where she beat world No. 5 Danielle Kang on the first extra hole. Korda played in the final group on Sunday with her sister, Nelly, the fourth-ranked player in the world, which served as a nice reminder of the sisters’ combined firepower. What most intrigues you about these super siblings?

Sens: The way they seem able to switch it on and off in a snap, from loose and laid back to fiery in an instant. You see Jessica today bopping to the music on the 18th tee, and then fist-bumping moments later? They both have that higher gear they can shift to in an eyeblink, but neither ever seems at risk of blowing a gasket.

Bamberger: The role that the athletic gene plays in determining who makes it and who does not. All that nature, in conjunction with all that nurture. The whole family is gifted. Mom, dad and bro, too.

Zak: What intrigues me most is we don’t know who is better! A great problem to have. Could we get two Korda majors in a single season? For sure. We’ve spent 2020 waiting for Nelly to break through in a major, but perhaps Jessica’s win could come first? They’re fun, that’s the bottom line.

Dethier: Jessica pointed out on Saturday that she’d been winning plenty — five times, to be exact — before Nelly got on Tour. It was a lighthearted comment, but with some truth to it, too. This week’s victory was particularly intriguing because it flipped the recent script of Nelly as the ascendant talent and Jessica as the supportive older sister. Shooting 126 on the weekend is serious business.

5. On Friday, Matthew Wolff was hit with a penalty stroke at the American Express for an infraction he committed on Thursday. Any qualms with retroactive rules reviews?

Bamberger: I much preferred the old system. When you sign for your card, you own the card. It made the player responsible, as the player should be. This is completely different.

Sens: Back when viewer call-ins were allowed, absolutely. But now, no. They make a lot of sense. I appreciate Michael’s point about owning your card. But if not all players are going to be equally willing to own their cards, I’d rather have a system in place that helps.

Zak: We’re stuck in this spot where players do things, explain themselves to rules officials and then the official takes them at their word, despite clear video evidence in hindsight. I don’t see a way to make the system better. From the video, it appears nothing but Wolff could have made the ball move. But what he says goes. Beyond that, I’d prefer that what happens on a Thursday be applied on Thursday, and not ensuing days. In other words, when the sun comes up, those scores yesterday are finalized.

Dethier: Use video at the end of a player’s round to try to get it right, but don’t drag it out. I’m with Zak: When the clock strikes midnight, the former day’s penalties should turn into pumpkins.

6. Mark Hubbard, on his last hole at the American Express during Friday’s second round and not close to making the cut, employed one of the more unusual putting strokes we’ve seen, when he putted with his left hand on the grip and just his pinkie on the bottom part of the putter shaft. What’s the wildest putting technique you’ve seen in action?

Sens: Mike Hulbert putting one-handed back in the day comes to mind. So does Bernhard Langer’s yip-prevention grip around the time of his second Masters win, when he took to clutching his left forearm with his right hand. He looked like a guy trying to prevent himself from falling off a cliff.

Zak: That’s the one — Hubbard’s. Easily the winner here. At first glance, I thought he was injured! I’ve never seen anything like it.

Dethier: A friend of mine is convinced that the ideal putting strategy is just to change grips every time you play, just to keep your brain guessing. So crazy it just might work!