Why Tiger Woods had ‘concerns’ before his latest back surgery 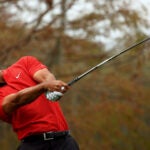 Tiger Woods hits a tee shot last month during the final round of the PNC Championship.

Notah Begay has known Tiger Woods since they were kids.

Which is maybe the last time, Begay said, Woods was swinging as slow as he was at his last event, the PNC Championship.

“I had a chance to visit with him and catch up over at the PNC Championship…,” Begay said on Golf Channel this week, “but one of the things he did bring up was that he noticed that his clubhead speed was creeping down around 113, and, I’ve known this guy since he was 9 years old, and he might have been over 113 back then.

“I don’t think he’s ever crept this low.”

On Tuesday, Woods said through his Twitter account that he had undergone a microdiscectomy procedure on his back following discomfort at the PNC, his third such surgery, and fifth on his back overall. Woods, Begay said, had had “some concerns.” As late as March of 2018, Woods had a PGA Tour-best clubhead speed of 129.2 mph.

“This is typical Tiger Woods,” said Begay, who played golf with Woods at Stanford and on the PGA Tour. “You know he’s going to do anything and everything he can to get as close to pushing that edge for himself as possible, and this is just another way to alleviate pain.”

“I talked to him just recently, within the last hour, and he mentioned that there was radiating pain back down the back part of his leg. Anybody that’s ever had disc problems like myself can realize and understand that’s just a very uncomfortable place to be in. Any way you can alleviate the pain, in this particular case, through this procedure, is the way to go, especially if you want to try and pursue elite-level performance.”

On his tweet, the procedure was called “successful” and that Woods would miss next week’s Farmers Insurance Open and next month’s Genesis Invitational, which he hosts — and still will. After that, there are six events — a World Golf Championships event, the Arnold Palmer, the Players, the Honda Classic, the Match Play and the Texas Open — before the Masters in April, where Woods is a five-time champion.

Woods, Begay said on Golf Channel, is already hitting balls. Rory McIlroy, who lives near Woods in Florida, said on Wednesday that Woods had the procedure on Dec. 23, three days after the PNC, and that “he was back on his feet the next day.” Neither Begay nor McIlroy said when Woods would return, but Begay said Woods “needs two starts to be competitive at Augusta.”

“He’s fine,” Begay said. “I mean, I literally 15 minutes ago exchanged texts with him, and he was hitting golf balls. It’s not like he’s laying in the bed watching reruns of Friends. He’s gotten the pain alleviated. I promise he wasn’t trying to rip his driver out there, but he’s going to let it come back, he’s going to let it heal and we all know that he’s got the event in April circled.”

At Augusta, or earlier, Begay said, Woods would be wise to play much like he did at his last victory, at the Zozo Championship in the fall of 2019, “where he really dominates with the putter and is just very sound tactically, strategically, playing percentages, hitting more fairways, hitting a lot of greens and really taking the stress, number one, off of himself mentally but also off his body.”

“There’s a lot of torque, a lot of stress, and I think he’s just going to have to play a little bit more of a consistent type of tee-to-green game and then just wait for when the putter starts to warm up like we know it can,” Begay said.