Why Rory McIlroy consulted Butch Harmon and his ‘database of players’ 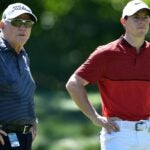 Last spring, Rory McIlroy was on top of the golf world. Coming off a year in which he won four times — and earned PGA Tour Player of the Year honors — he was rounding into form at just the right time. He ranked No. 1 in the world when the calendar flipped to March as everyone geared up for the Masters.

Then, the world shut down — golf included.

McIlroy was confined to the bounds of his home base in Jupter, Fla. Like everyone else, life slowed down. A break is never a bad thing, but for an athlete that’s used to bouncing around the globe, it was an adjustment.

Perhaps the most consequential change was the inability to see his longtime swing coach, Michael Bannon. Because of Covid-19 travel restrictions, McIlroy’s tune-up sessions with Bannon were limited to text and Zoom.

By the time to two were able to see each other again in July, McIlroy lost the form that had gotten him to No. 1 in the world. He didn’t register a top 10 until September, and by that time he’d fallen to No. 4. He’s still yet to win since the shutdown.

In the midst of those struggles — exacerbated by the inability to work with Bannon — McIlroy sought help elsewhere. On a trip out west to play in the CJ Cup, McIlroy enlisted the services of legendary swing coach and GOLF Teachers Hall of Fame member Butch Harmon.

“We spent about four and a half hours together going through everything in his swing,” Harmon told Sky Sports in November. “He came to see me because he just wanted to make sure he was on the right track.”

The second opinion seems to be paying off. McIlroy played well throughout last fall as he and Harmon exchanged texts and videos in an effort to get him back to top form. Although he didn’t register a win, two top 10s in majors, including a T5 finish at Augusta, provided a glimpse at the McIlroy of old.

“The one thing I love about Butch is he’s worked with so many players,” McIlroy said Thursday. “So, if you’re trying to explain to him, ‘Look, I’m trying to do this or I’m trying to create that feeling,’ the database of players that he’s worked with over the years, he could say, ‘Well, Freddie Couples felt this, or Tiger did this or DJ felt that. It’s always nice to have that reference.'”

McIlroy revealed that after the Masters, he didn’t take more than three or four days off. He’s back to working with Bannon on a more frequent basis, but Harmon still offers up help when he’s called upon.

That extra set of eyes appears to be paying dividends. Making his first start of the new year, McIlroy posted an opening-round 64 at the Abu Dhabi HSBC Championship to claim an early one-stroke lead.

“(I) felt maybe as sharp as I’ve ever done coming into the start of the season,” McIlroy said. “It’s paid off early.”

If he can continue to absorb the knowledge of the two legendary swing coaches, watch out. Another Player of the Year campaign might be in store.