‘What in the heck is that?!’ Pro employs oddest putting stroke you’ll ever see 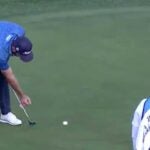 Mark Hubbard during Thursday's first round of the American Express.

Mark Hubbard, through 35 holes at the American Express, had taken 56 putts with his two hands on the grip of his putter.

Which was after he had taken his right hand off the grip.

“What?” announcer Terry Gannon said on the Golf Channel broadcast of Friday’s second round.

“What in the heck is that?” analyst Curt Byrum said.

“That is next level right there,” analyst Trevor Immelman said.

What it was is what may come when you double-bogey your 14th hole at PGA West. And bogey your 17th. And your tournament is one made putt from being done.

“So everything looks good right about now — posture looks great — but the extension in the right arm is where it’s at, and the pinky, the pinky just sticking out there, and now wrapping around the lower part of the shaft, that’s just textbook technique,” Immelman, playfully, analyzed.

“I’ll tell you what: The playing of the stroke was spot on. He’s clearly done this before.”

Hubbard would miss the 6-footer. He tapped in the bogey.

With his two hands on the grip of his putter.

“You think this game doesn’t drive people crazy, or what?” Byrum said on the broadcast.