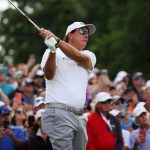 Phil Mickelson hits his tee shot on Friday on the 5th hole at Detroit Golf Club.

Check in every week for the unfiltered opinions of our writers and editors as they break down the hottest topics in the sport, and join the conversation by tweeting us @golf_com. This week, we discuss Phil Mickelson taking issue with the timing of a gambling story, who should be Bryson DeChambeau’s next caddie, early tee times and more.

1. Ahead of the Rocket Mortgage, Phil Mickelson took issue with the timing of a Detroit News story that reported that a noted Detroit bookie testified in 2007 that he placed one or more large bets on Mickelson’s behalf but was unable to pay the $500,000 he owed afterward. “I’m disappointed they would curiously pick this week to write an article about a bet that was made over 20 years ago and a jury trial that took place in 2007, where the guy who was convicted is dead and where the only purpose for this article is to embarrass Phil Mickelson,” Mickelson’s lawyer, Glenn Cohen, told ESPN. After Thursday’s round, Mickelson hinted that he wouldn’t return to Detroit, only to backtrack slightly on Friday when he said he would return if 50,000 people sign a petition and agree to do “one random act of kindness for another member of the community.” Much to unpack here, but we’ll ask this: Is Mickelson justified in being upset?

Alan Bastable, executive editor (@alan_bastable): I’m mystified by the whole episode. Phil’s smart enough to know that his tweet storm has driven way more attention to the article than it otherwise would have enjoyed. But clearly the report pushed Mickelson’s buttons, and he wasn’t willing to just let it go. The argument that Phil and his gambling buddies getting stiffed for half a mil by a shady bookie isn’t newsworthy is a head-scratcher, regardless of how many years ago it happened. No, it’s not A1 news, but it’s news, especially given Phil’s history. Also, for a Detroit paper to hold the story for the week that the Tour is in town — and when the city is particularly attuned to golf — is local journalism 101. Last thought: Given the piece was behind a paywall for a while, one wonders how many of the story’s critics actually, you know, read it.

Dylan Dethier, senior writer (@dylan_dethier): Bastable pretty much nailed this one, so I’ll second his entire description, but add this: No, I don’t think Mickelson is necessarily justified in being upset, but I’m not sure that’s the point, because I do wonder if he has realized that taking aim at a popular punching bag (the media) is a popular move with plenty of his loyal fans. Approval rating for Mickelson vs. Snell is decidedly one-sided.

Josh Sens, senior writer (@JoshSens): I third the motions above. There’s a lot not to like about “the media,” but blaming it for any coverage you don’t like is lazy and lame. So was his threat to boycott the tournament as payback. Fortunately, Phil realized the silliness of his first reaction and came back with a more reasonable one on his mulligan.

Nick Piastowski, senior editor (@nickpia): Fourthed! This is the media doing their job, and in Snell’s and the Detroit News’ case, doing it well. There’s been buzz of late of whether the unflattering should be uncovered, and though, yes, I, too, am a member of the media, it’s tough to imagine a world where the only news we got was the hand-crafted kind from the athletes and leagues themselves. Also, I’m curious as to why Mickelson kept poking at this — he was still responding to tweets about it as late as last night. Seems odd to me.

2. Hours before he started his defense at the Rocket Mortgage Classic, Bryson DeChambeau and his longtime caddie, Tim Tucker, announced that they were parting ways, with DeChambeau’s agent, Brett Falkoff saying the relationship had “run its course.” DeChambeau would use Ben Schomin of Cobra/Puma Golf, shoot rounds of 72 and 71, and miss the cut. With DeChambeau well known to tinker and adjust, often for hours after a round, what type of caddie would best help him going forward?

Bastable: Tour pros are complicated beasts, and Bryson is certainly no exception. Effective caddies are expert psychologists as much as they are strategists. DeChambeau seemed to most value Tucker’s “calming effect,” once noting: “He’s super easy and cool and collected. Whatever I say, it doesn’t bother him at all.” Presumably more of that vibe would benefit the tightly wound DeChambeau. Night vision would also be a bonus. Who knows, Tucker may resurface by Bryson’s side again one day. After all, this wasn’t their first break-up.

Dethier: DeChambeau is admittedly a demanding boss. He needs someone who will tolerate that demanding nature — standing on the range all night, for one thing, and working with endless measuring, theorizing and tinkering, for another, while still having the confidence to step in when DeChambeau needs an outside voice of reason. That’s not impossible to find, but it’s a tougher plug-in than for another player of similar ability (of which there aren’t many).

Sens: Patient. Punctilious. And ideally not a parent to young children, as that caddie is going to be busy most days and evenings. But it would be more interesting — and maybe even more productive — if he went with the opposite: some old-school looper whose idea of high-science stopped at tossing a few blades up and pulling a club. Someone who might say, every now and then, yo, Bryson, we don’t need to consult Euclid before you strike this putt. Just give it a once-over, feel it with your feet and let it go. Opposites can work in marriages. And in player-caddie pairings.

Piastowski: Someone who is both patient and a counter-puncher. Bryson, as we know, is a man of strong opinion. You know what challenges those people best? Not a bunch of yes men. Of course, at the same time, that person better be up for a debate. On another note, I asked a caddie friend whether he’d take the job, and he quickly said yes — the challenge of carrying the bag for the casino/mad scientist/power lifter is maybe the most unique on Tour.

3. Ben An took to Twitter to complain about how commonly the Tour assigns him early starting times. At this week’s Rocket Mortgage, he teed off at 6:45 a.m. on Thursday, and in response to a tweet that asked him if “he’s asking for these,” An wrote: “Never asked for it and i f****** hate it.” (He later deleted the tweet, apologizing for the “f bomb.”) Do you agree with An — are early starters on Tour at a disadvantage?

Bastable: I’m fascinated by this question, and it has a quantifiable answer. Simply need a deep dive on scoring averages from the first, say, three groups of every Tour round from the past few years. You can certainly understand players not loving to have to rise at 4:30 or 5, but they’re also getting purer greens (thanks to little foot traffic at that hour) and a calmer atmosphere on the course (before the galleries get big and rowdy), which you would think might be an edge. Love to hear more players’ takes on the topic.

Dethier: Yeah, we need a data-driven answer here, but there’s no chance that teeing off at 6:45 is an advantage over, say, 8 a.m. Waking up at 4 a.m. semi-regularly can’t be good for the biorhythms. Mornings are colder, dewier and, well, earlier. I’m sure the effect is slightly different for each player, but An’s got a reasonable gripe.

Sens: While we’re digging up that data on o’dark-thirty performances, can we also confirm that An is correct? Does he really get stuck with a disproportionate number of those times? If there really is a serious imbalance among players on that front, the Tour should try to balance things out.

Piastowski: It’d be a little tough to quantify whether an early tee time would have an effect — different players, different courses, on and on — but I will say I struggle to function before 11 a.m., so there might be something there. On another note, for what it’s worth, Bubba Watson had an interesting take here after he shot a third-round 67 at the Rocket Mortgage after starting in the second pairing of the day, saying: “Look at every golf tournament — there’s always somebody that plays pretty good in the morning because they come out, they free it up and they don’t have the wind and they have the smooth greens.” Sounds like we have two stories to write!

4. On Tuesday, the fourth edition of the Match will be played, when the team of Phil Mickelson and Tom Brady take on the team of Bryson DeChambeau and Aaron Rodgers at Moonlight Basin in Montana. What are you looking for from this iteration of what has become a staple on the golf calendar?

Bastable: First off, the Mickelson-DeChambeau dynamic. Both are big personalities with go-for-broke playing styles. Will be interesting to see how/if they mesh on this kind of stage. Also curious to see how/if Brady bounces back from his ignominious start at the last Match — talk about scar tissue! Lastly, intrigued to see Moonlight Basin in action. The mountainous setting looks spectacular, but I hear it’s also a beast.

Dethier: Moonlight Basin could yield some 400-plus yard drives at elevation. Let’s see the ball fly through that scenery!

Sens: I’ll see your 400 and raise you 100. I’m expecting a 500-plus yard bomb from Bryson. Whether his smack-talk game is any good in person will also be interesting. Cheeky remarks on Twitter don’t count.

Piastowski: Charles Barkley commentary and some sort of Brooks Koepka appearance. This is a Hollywood event, so let’s Hollywood it up.

5. As we cross into July — happy Fourth, by the way! — we also cross the halfway point of the year. What’s the golf goal you want to cross off your list before the end of 2021?

Bastable: Goal never changes, because it has never happened! Break 80.

Dethier: Play a round with my brother! We learned the game together and spent plenty of childhood summer nights playing ’til dark, but life and geography make it tougher to get out together these days. Still, I think this will prove an achievable goal.

Sens: I’ll be crossing one of the big ones off this coming week. Finally gonna play Lawsonia Links in Wisconsin. If it’s even half as good as I’ve heard, it’s going to be a treat.

Piastowski: We’re gonna go Wisconsin heavy here, but only because I’m from there. I want to play one of the Milwaukee County Parks munis, eat a brat and drink a Lakefront Brewery IPA. It’s been too long since I’ve done that. Way too long.