‘What am I going to do, go and get an office job?’ Meet Richard Bland 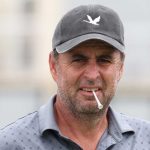 Richard Bland has played in two U.S. Opens, this year's and the 2009 tournament.

Richard Bland, before the Betfred British Masters last month, had played 477 tournaments over a 20-plus-career. And not won 477 tournaments. In 2018, at 45 and soon to be 46, he had lost his European Tour playing privileges, only to become the oldest player to graduate from the lower-level Challenge Tour and grind his way back. All of which begs a question:

What are you still doing here, Richard?

“Yeah, but golf is all I know,” Bland said Friday. “When times got tough and I lost my card two or three times, I think, what am I going to do, go and get an office job? I’m not that intelligent; I’m afraid. So it was just, right, OK, I’ve always been someone that can get my head down and work hard, and I always knew I had the game to compete on the European Tour at the highest level. I’ve always known that.

“But as any golf career, you’re going to have peaks and troughs. Of course you are. But I just think every kind of sportsman, sportswoman, they have that never-die or that never-quit attitude, no matter whether it’s golf or it’s tennis or it’s boxing, whatever it is. The old saying is you get knocked down seven times, you get up eight. I’ve always had that kind of attitude that you just keep going. You never know in this game, you just keep going.”

And kept going he did. He’d win tournament 478, the Betfred British Masters, becoming the oldest first-time winner on the European Tour. Then he qualified for this week’s U.S. Open, only his second career Open (he missed the cut in 2009) and only his fourth major overall (he’s played in two Open Championships). Then he shot one-under 70 in the first round at Torrey Pines. And four-under 67 in second.

What is Richard Bland doing here? Only beating the best golfers in the world.

“Yeah, I’m fortunate with what I do. I think we all are, whether you’re playing on the European Tour, you’re playing on the PGA Tour, whatever. I think any amateur golfer would probably give their right arm to play it as a living. I think they might think something different if they did play it for a living, but yeah, I’ve always been — thought of it as I’m very fortunate that I can travel the world and play some of the best courses in the world and some of the biggest tournaments in the world.

“I’m certainly not looking at my career just now as sort of lack of success or anything like that. I just feel privileged that I can do what I can do.”

Let’s meet Richard Bland, the 48-year-old Englishman who is the unexpected 36-hole leader at the U.S. Open.

Bland may not have played in the majors, but he sure watches them

Bland was asked after his round on Friday if he’s watched the majors and enjoyed them — or does he tune them out after having played in so few.

“Oh, of course. I’m a professional golfer, but I’m also a golf fan,” Bland said. “I love watching the Masters, especially I’ve been fortunate enough to play there with a friend of mine. There’s nothing like the back nine of a Masters. Hopefully if I can keep playing the way I’m playing, maybe next year I might be able to experience it, or the year after that would be unbelievable. That would be a proper dream come true.

“You know, in the qualifyings that we have in Europe, I think I’ve lost in a playoff four times for this, for a U.S. Open, and I’ve lost three times in an Open qualifying. I could have maybe played closer to double-figure majors, but it’s not quite to be, and I’m not going to lose any sleep over that. I’m just enjoying this one right now.”

Bland, after his victory at the British Masters, was escorted to a video booth, where his family was on the other side of the camera to congratulate him. They cried. His dad suggested they’d be drinking. Then at the end of the call, Bland asked: “Can I have a roast lamb dinner on Tuesday?”

How would he celebrate a U.S. Open win?

“Well, I’ve got a flight back on Sunday night because I’m due to play in Munich next week,” he said. “I’d probably maybe skip that one, I think, and I might buy a new ticket and fly home a couple of days later.”

Bland doesn’t have a hat sponsor, but he is wearing a hat

During the first round of the Open, Bland wore a white hat adorned with a bird logo in black. In the second round, he wore a gray hat with the bird logo in white. But that’s not a sponsor.

“This is just my golf club back home, the Wisley,” he said. “I don’t have a hat kind of deal at the minute. So if anyone is offering … But yeah, I kind of said to the golf club, look, it would be quite nice if I wore the hat, and they gave me sort of like 10 hats to come out here with, so yeah, it’s just the golf club that I’m a member at back home.”

Bland cheers on another underdog

Southampton? One of the English Premier League’s also-rans?

“Yeah, well, we’re in a sport where you’re going to miss some cuts, so yeah, I try not to take the Twitter sort of too seriously,” Bland said. “I’ve had a few weeks off, weekends off in my career, so yeah. And putting I’m a Southampton fan on there, as well, is probably — as most people would probably know in England, that’s probably quite humorous, as well, because you shouldn’t be owning up to that.”

Bland has stuck with his swing coach his whole career

Before Bland would talk to his family after his win at the British Masters, he’d talk to Tim Barter of Sky Sports.

And Tim Barter, Richard Bland’s swing coach for his entire career. From just off the 18th green, Bland cried. Barter cried. And then they talked golf like they have for the past 20 years.

“In golfing terms, we just kind of speak the same language,” Bland said of his coach. “I’ve always been a firm believer of the way I want to swing a golf club, you get the coach that kind of teaches that. That’s what Tim does. Every time we work together, I go away knowing exactly what I want to work on. We don’t really do an awful lot now. I saw him twice last week. I think we were drinking coffee for most of it. We haven’t really changed anything for a while. It’s just you can just sort of fine-tune here and there. That’s all it is. The kind of — we’re not trying to sort of reinvent the wheel.

“But he’s just the best coach in the world for me. As I said after my win to Sky, if I had another 20 years of a career, he would be my coach for 20 years. He’s part of the furniture. Just took me 20 years to listen to him.”