Tour Confidential: Does the U.S. win easily, or does Europe rally on Ryder Cup Sunday? 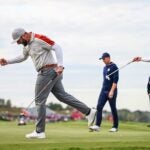 Jon Rahm and Sergio Garcia on Saturday, after Rahm's birdie putt on the 16th hole at Whistling Straits.

Check in each day of this week’s Ryder Cup for the unfiltered opinions of our writers and editors as they break down the hottest topic in the event, and join the conversation by tweeting us at @golf_com.

Day two is complete at the Ryder Cup at Whistling Straits, and the U.S. leads 11-5, the largest lead it has ever had heading into a final day. On Saturday, the Americans won three of four matches in morning foursomes play, then split with the Europeans in afternoon four-ball. For the U.S., Dustin Johnson has played four matches and won four, while the world No. 1, Jon Rahm, has earned 3.5 points over four matches. Only Sunday singles remain, the Americans need just 3.5 points to win. So … who ya got?

Dylan Dethier, senior writer (@dylan_dethier): The Americans win, but there’s going to be a moment midway through the round where we look at about seven blue flags and start doing some careful arithmetic. U.S. by five, and the celebration begins when Daniel Berger shotguns a beer on one of those giant boats in Lake Michigan.

Sean Zak, senior editor (@sean_zak): The record is in jeopardy. That’d be 19 points. The opposite of what Dethier says happens. Eight red flags early make it a rout from the jump. Roars all over Whistling Straits. The final matches cease to matter. An 18-10 rout. And Rory goes 0-4.

Luke Kerr-Dineen, Game Improvement Editor (@lukekerrdineen): I’m starting to think a European blowout victory may no longer be on the cards. As Sean said, the record is 18.5, so if we win all 12 matches that gives us only a 17-11 victory. But winning all 12 is a tall task. Our boys aren’t all on their best form this week. Plus, they won’t want to let this Wisconsin crowd down too hard after spending four consecutive sessions lulling them into a false sense of security. Fourteen points to retain the cup? We’ll probably just go ahead and win the first nine matches and let the Americans have the other three for dramatic effect. 14-14, Europe retains the trophy.

Jessica Marksbury, multimedia editor (@jess_marksbury): Harrington will surely send out his big guns first, so if players like Rahm, Garcia and Lowry take some of the opening matches, it may look like Europe is mounting a bit of a charge. But the American roster is just so deep, and the points foundation has been laid so well by the team matches, that there is simply no fathomable way Team USA doesn’t claim the 3.5 points needed to take the Cup. It already took a “miracle” to overcome a four-point deficit — what would you even call coming back from six points behind? Impossible.

Michael Bamberger, senior writer: I got everything wrong about this Ryder Cup, and I’ll likely get this wrong, too. Had I known it was going to be this windy, I would have thought the European lead would be significant through two days. Needless to say, it’s not. My guess is the best the Europeans can do is win half the Sunday matches. Over early. Not the sporting fight we would have hoped to see, but as the man says, it is.

Josh Sens, senior writer (@JoshSens): Like Michael, I’ve been wrong about pretty much everything this week, so keep that in mind when I say Michael’s right. This will be over early, unfortunately. Too many Europeans out of form; too many Americans playing beautifully. Rory looks lost. Poulter has been a non-factor. And I’ve almost had to avert my eyes at Hovland’s putting. Wish I could say I were looking for a nail-biter of a Sunday, but it’s not going to happen.

Nick Piastowski, senior editor (@nickpia): Luke’s fun aside, I’ll make this a Tour Confidential rout, much like the Americans will do on Sunday. The U.S. rolls. Jon Rahm wins, I think, but does anyone else? You’re going to hear a whole lot about Medinah until the balls get in the air on Sunday, but this will be a Whistling Whipping (trademark).