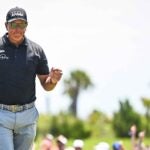 Phil's historic triumph at the PGA Championship might well rank as 2021's most historic moment.

Check in every week for the unfiltered opinions of our writers and editors as they break down the hottest topics in the sport, and join the conversation by tweeting us @golf_com. This week, we break down everything 2021: the year in review, its biggest moments and most significant players … And we take a look forward to 2022.

1. What a golf year! Among the highlights: Hideki won Japan’s first green jacket; Phil became the oldest-ever major winner; Nelly won a major and gold; Tiger spent most of the year in recovery before a nearly triumphant return in December; and, of course, Brooks vs. Bryson. When you look back at 2021 a couple of decades from now, which story is most likely to most resonate?

Alan Bastable, executive editor (@alan_bastable): Tiger’s romp with Charlie at the PNC was a blast to watch on many levels (it’s also still so fresh in our minds), but I give the nod to Phil’s win at Kiawah. What’s easy to forget about that week is how poorly he was playing, relative to the field, coming in. In the six primary Strokes Gained categories, Mickelson ranked no better than 120th. That PGA Championship was a reminder of the blessed nuttiness of this game: on the right course, over the right four days, age can become nothing more than a number.

Michael Bamberger, senior writer: Phil’s win was the most unexpected thing, but this was the year that Tiger’s life, athletic and otherwise and by his own admission, changed forever. Very likely the greatest golfer to ever play the game will not enjoy the long sunset that Arnold and Jack and even Hogan did. It was a soaring, incredible thing he did at the P-and-O (parents and offspring) with his son Charlie in December, but the underlying event was what happened on a quiet Los Angeles road on Feb. 23.

Josh Sens, senior writer (@joshsens): Those were the most captivating for me as well. But the story that is likely to have longer-term implications involves the rival tours, which raise all sorts of legal, ethical and practical questions: about the strengths and weaknesses of the PGA Tour; about how, where, when golf will be played around the world; about the character of players and other participants, and on.

Nick Piastowski, senior editor (@nickpia): The Tiger story jumps out — if this is it, then the moment in February will be forever frozen in time, but if he somehow slips on another jacket or hoists another jug, then we’ll look back and wonder how he, as he termed it a few weeks ago, climbed the mountain. Again. But I’m going to agree with Josh. I’m not so sure we’ll see any real resolution on the rival tour fronts by the end of next year. But I’m betting the PGA Tour takes more steps to ward off any and all in 2022. And I think there’s a good chance that, in maybe about two or three years, we’ll look back at this year as the one where pro golf began to seismically change.

2. Conversely, which story from 2021 did not get the attention it deserved?

Bastable: Tiger’s crash would be high on the list. Obviously, the accident itself was covered with great intensity, as was his recovery when Tiger made details available, but so many questions still linger — including why he was driving so fast and how Woods truly feels about having altered the trajectory of his career. We may never get those answers. Also, for all the buzz around Phil, shoutout to 47-year-old Stewart Cink, who did not get enough credit for picking up two titles in 2021. Raise your hand if you saw that coming.

Bamberger: Mickelson’s win at the PGA. How on earth did he do it? We saw the shots. But what was happening that we could not see? Astounding, really, given where his golf had been, given his age, given how long he has been at it.

Sens: I’m with Alan on Tiger. The accident gave rise to all sorts of raw and honest moments from Woods. But as always seems to be the case, there seemed to be so much more to it than any of us will know.

Piastowski: All good answers. But Jin Young Ko’s 63 straight greens in regulation to close the year and help her win the CME Group Tour Championship. was ridiculous. And underappreciated.

3. For sheer entertainment, which 2021 tournament do you think delivered the most value?

Bastable: The women’s Olympic golf event was a seesaw thriller that I was glad I stayed up to watch — with two titans in Nelly Korda and Lydia Ko battling against the homeland hero, Mone Inami, and India’s short-hitting Aditi Ashok, who impressively contended despite wearing out her hybrids. It was a fascinating blend of players and styles. With the gold medal in the balance, a late-in-the-round weather delay ratcheted up the tension even more. Korda ultimately prevailed but I was on the edge of my seat (bed?) until the final putt dopped.

Bamberger: The Solheim Cup. Loved the course, the swings, the teams, the camaraderie. It was all about the golf. There’s not enough of that.

Sens: The U.S. Open. For all the grief that Torrey took for the architecture set, it delivered yet another electric finish.

Piastowski: All good answers again! To add to the conversation, I’ll add the two-man, six-man playoff between Patrick Cantlay and Bryson DeChambeau at the BMW Championship back in August. Some of the best shot-making and putt-making in sudden death you’ll ever see.

4. We can’t talk about 2021 without talking about Bryson DeChambeau, who between his speed training, UFO sightings and feud with Brooks Koepka may have found himself in more headlines than any other player. In your mind, has DeChambeau’s impact on the game been overstated or understated?

Bastable: I’ll say understated when you consider that he has forced every one of his opponents to reconsider what is possible in terms of distance. Exhibit A: Rory McIlroy who admitted that chasing Bryson’s numbers drove Rory out of his comfort zone and ultimately derailed his game. And that’s the thing: Bryson’s distance is not just about swinging hard. It’s about swinging hard and controlling his clubhead and a hundred other things. Turns out hitting 400-yard bombs in the heat of competition is a difficult formula to master.

Bamberger: I’ll say overstated when you consider that it is very unlikely that other golfers are going to do what he has done to his body, to the conventional notion of how to swing a golf club or even choose your golf clubs. He’s a one-off.  The UFO thing is cool.

Sens: Was there a day in golf this year that didn’t yield a Bryson headline. No doubt he’s one of the more compelling characters in the game, but I don’t know how you could say that we in the media didn’t wring him dry for every possible shred of what we now call ‘content.’

Piastowski: In the present, a bit overstated. Like Josh mentioned, Bryson’s exploits do get plenty of pub, quite possibly more so than golfer going right now. But, I think when we look back somewhere down the line, how he’s both changed his body and emphasized a go-for-broke style will be remembered as pivotal. Yes, it’ll still take talent to make a score, but, as Bryson has tried to do in other avenues, he’s shaved that difficulty down just a fraction, and the next generation is taking notes.

5. What was your most memorable interaction with a Tour pro or other golfing notable in 2021?

Bastable: Remember Hunter Mahan, one-time Next Big Thing? He’s had just one top-10 finish since 2015 but he’s still out there grinding and chasing the dream. Earlier this year, I was trying to reach Mahan for a story I was reporting on the 10-year anniversary of the Golf Boys. He was happy to oblige. Mahan called me from the Honda Classic, and gave me 25 minutes of Golf Boys gold. Then it was back to the range.

Bamberger: Jim Thorpe, at the PNC. I was asking Thorpe about his swing–he took it slightly outside and held on with all his might. No release at all. He said, “This one time, I’m hitting 4-irons next to Tiger, on the range. Tiger says, `Thorpey, hit me a hook 4-iron.’ I say, `Tiger, I don’t hit hook shots.’”

Sens: Driving around Stillwater, Oklahoma as a passenger in Viktor Hovland’s car, listening along with him to death metal and other stuff he calls music. He was frank, funny, thoughtful —a great conversationalist with wide-ranging interests in politics, philosophy and, of course, the science and mechanics of the swing. He even had a carefully considered argument for why death metal is better than rock. I wasn’t buying it. But at least he had his reasons.

Piastowski: Debbie Blount is no doubt notable — at 62 years young, she’s playing golf for the Eagles of Reinhardt University. Back in March, we talked for over two hours, over two phone calls, about golf, life, rap and country, and she told me a joke or two, of which I could not include in the story I wrote — for censor reasons.

Bastable: Sergio’s walk-off ace at the WGC-Dell Match Play was about as baller of a shot as they come. But for sheer magnitude, tough to beat Jon Rahm’s putts on the 71st (25 feet) and 72nd hole (18 feet) at the U.S. Open. Both were left-to-right snakes — the hardest kind of putts for a righty — and he knew he needed them for U.S. Open glory. Clutch city.

Bamberger: Charlie Woods,  at the PNC on Sunday, on 17, a par-3, at the Ritz-Carlton course in Orlando. Perfect swing, a 5-iron from 170 yards, breeze in his face, flag left, water left. On the stick all the while, Charlie staring. He made the next one, from four feet. All the father had to do was watch.

Sens: Rahm’s back-to-back putts on 17 and 18 at Torrey take the prize for me. But I’ll give the silver to Olympic gold medalist Xander Schauffele. That wedge from the fairway that he needed to save par wasn’t the most demanding shot if you stripped it of the context. But that’s the thing about big shots. You can separate them from the moment, and Schauffele came up huge.

Piastowski: I’ll go with two, if that’s OK. The Bryson drive over the lake at Bay Hill (speaking of question four) — and then Lee Westwood not cutting the corner in the same pairing with DeChambeau the next day, but still celebrating like him afterward. Both were great.