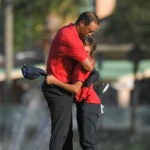 Tiger Woods and his 12-year-old son, Charlie, embracing on the 18th green.

ORLANDO, Fla. — On Saturday morning at the Ritz-Carlton Golf Club, the announcer began the most-anticipated first-tee introduction of the entire golf season.

“From Jupiter Island …” he began.

Twenty-eight hours and 35 holes later, Team Woods stood in the 18th fairway. They would need eagle to have any realistic chance at a PNC Championship win, but they’d thrown “realistic” out the window at least an hour before. Charlie and Tiger had reeled off 11 birdies in a row; the 12-year-old was leading the team, relishing in the pressure, and the 46-year-old was stepping up as needed, stuffing wedges and burying clutch putts.

Charlie’s fairway-wood approach chased up toward the green but ran out of steam and fell into the front left bunker. Tiger striped a long-iron, but it just stayed ever so slightly too far to the right and trickled over the back edge. If they were going to win, it would take a chip-in to do so.

Tiger hadn’t walked an entire hole all week. Even on the par-3s, he’d trekked only as far as it took to get from the cart path to the green. He’d lamented the fact that he was unable to walk the course with Charlie, acknowledging that it just wasn’t quite the same to putter down the fairway at low speed. But now, with roughly 2,490 of the 2,500 ticketed fans gathered behind the 18th green, he left his cart with his caddie, called for Charlie to wait up and mustered the energy for one final push, a 200-yard stroll home, step-for-step with his son.

We’ve seen Woods make that walk 100 times or more, down the final fairway of a golf tournament with a chance to win, dressed in red and black. We’ve never seen him take the walk alongside a miniature version of himself. It’s not clear what they discussed on the walk or if they said anything at all; Charlie had spent the last few holes in a state of silent flow, locked in, tunnel vision. That they were together mattered.

Charlie got aggressive with the chip, nearly slam-dunking it, on-brand for the kid who’d been crushing putts into the back of the cup all week. The free wheels of youth. Tiger stepped up next. He’d been the one keeping it light, laughing, smiling and chatting his way through the last few holes even as his son had put his blinders on. Now he was all business. He glared at the flagstick, then down at his ball, and then he clipped his wedge shot perfectly. It went racing toward the right edge of the hole — but he’d hit it ever so slightly too hard. It rolled past the cup, settling some 6 feet long.

Tiger closed his eyes. He lowered his head. He looked to be in pain, but this wasn’t the pain of a reconstructed leg or a balky back. This was the pain of disappointment. Years and injuries have changed nothing in this regard: He expects to deliver, no matter how improbable the situation. Doubly so, knowing his son was counting on him.

They missed the putts coming back, which didn’t much matter. Team Woods had secured solo second. They removed their hats, shook hands with their playing partners, and then Tiger pulled Charlie close for a firm hug.

Those two moments, the whisper on the first tee and the walk down the final fairway, were the bookends of Tiger and Charlie Woods’ captivating, exhilarating, improbable week at the PNC Championship. They defined the event. There was Tiger the father, reminding Charlie he loved him, regardless of birdies. There was Tiger the golfer, showing his son that the pursuit of birdies are important, too, because you should do what you’re doing, all in. There was Tiger in all his stubborn glory, refusing to go away, willing his way back on two feet, walking alongside his son, playing actual tournament golf.

But there was plenty in between the bookends, too.

There was Tiger’s return to golf in the practice round, an encouraging coming-out party in which he showed he could still hit the shots, especially the shorter ones, especially if he had a ride to get from one to the next.

There was the debut of his new driver, a red-faced Stealth that Woods swung sparingly, saving his energy for the real thing. “Hey, got to love the colors,” he said. Somewhere, a room of TaylorMade employees smiled.

There was Woods watching Charlie hit balls on the range, out of energy to do so himself, reclining against the side of his bag, not a care in the world. And there was Lee Trevino, arriving to show both Tiger and Charlie a thing or two.

There was Mark O’Meara, greeting Woods at breakfast, inspired by his comeback and touched by his very presence. “I gave him a big bear hug. I hung on for a sec and I said, ‘Y’know, bud, it’s so good to see you. I love you,'” O’Meara said.

There was Joe LaCava, reunited with his boss for the first time since this event last season. He’d been to see Woods twice, once in April and once in July. “Just wanted him to know he’s got a friend around,” he said. “Hang out, watch TV, not do much. But at least let him know we’re thinking about him and that everyone’s looking out for him.” He was pleasantly surprised to see his boss back in action. Surprised — not shocked.

“I don’t ever want to use the word ‘shocked’ with this guy,” he said.

There was Charlie not looking at Justin Thomas in the lead-up to the first round, refusing to engage with “the enemy.” There he was later in the round, draining a 60-foot practice putt and telling Thomas to show him the money. And there was Thomas draining the follow-up putt on top of him, a reminder who the older brother really is.

There was Woods’ daughter, Sam, walking with his longtime girlfriend, Erica Herman. This is a family affair, after all, so they were inside the ropes, sometimes squeezing alongside Tiger in his cart, usually sticking to the fairway’s edge. Sam is 14 and doesn’t play golf, nor does she crave the spotlight her brother is learning to love. But she, like Tiger, enjoyed the family huddles on tee boxes.

There was Nelly Korda, World No. 1, waiting sheepishly for Woods to finish his first round so she could get a picture with him, giddy and appreciative and authentic. “I was just starstruck,” she said.

Then there were the Sunday birdies, an entire bucket of them. There were birdies at No. 1 and No. 2 and there was an eagle at No. 3, a hot start that catapulted Woods and Woods into a short-lived solo lead. A few holes later, they started making birdies again, leaning on Tiger’s steady ball-striking and Charlie’s relentless fairway-hitting, plus the family trait of trying really damn hard, no matter what.

There was Charlie’s new move, impossibly smooth, where he’d pick up the coin marking his spot before his putt had even gotten to the hole and toss it to Tiger. Dad, don’t need you here. He got a lot of practice.

Memorable moments piled up, heartwarming images that they — and we — will hang onto.

And then something strange happened: The tournament itself began to matter. Woods had dismissed it as a hit-and-giggle, and with good reason: This was a two-player scramble, and his competitors ranged from 11 year old to 84, included professionals and amateurs and played from a wide variety of tee boxes.

But that ignores the presence of Woods himself, and Woods wrecks the equation. A quarter-century ago, the golf world experienced a seismic shift. The importance of a Sunday afternoon suddenly depended on exactly one thing: Was Tiger Woods in contention? The events that “mattered” mirrored his schedule. We learned the routing at Torrey Pines and Muirfield Village and Quail Hollow and more. When he played, we watched. It mattered.

And so, as Team Woods played their way into surprising contention, Sunday suddenly mattered. It mattered for Woods, who lives and has lived for these moments in the arena. And it mattered for golf fans everywhere, who have gotten to know what golf is like when Tiger is competing versus when he’s on the sidelines, and we know which version we prefer. It mattered because Charlie Woods is a superstar, a 12-year-old with a flair for the dramatic who craved the competition and rose to the occasion.

Mostly, though, this Sunday mattered because we didn’t know whether there would be more Sundays like this one. Ten months ago, Woods feared he’d lose his leg. At one point, he says, it was 50-50. It’s hard to know exactly how that has changed Woods’ perspective; he remains a closed book on certain introspective matters. But he finished his Sunday media session in an unusual way: with a series of thank-yous.

“I’m very lucky and very thankful to all of the surgeons and the nurses that have helped me along the line,” he said. “And all my physios. They have pushed me and they have worked on me, and even on my hard, dog days, to get my butt in the gym. And there are some days I don’t want to do it, but they keep pushing me to keep going.”

He stepped away from the podium, thankful and exhausted. A group of fans began cheering, then chanting. “Ti-ger! Ti-ger! Ti-ger!” They followed him around the clubhouse and into the parking lot, where a group of well-placed security held them in check. Team Woods drove off, out of the Ritz-Carlton parking lot, back to privacy. The cheering followed them out. Tiger Woods was hardly the only grateful one.