U.S. has more work to do: 3 things to know from thrilling Sunday at the Solheim Cup 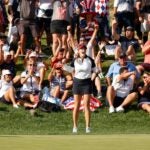 Jennifer Kupcho provided one of the most thrilling moments of the Solheim Cup on Sunday afternoon.

TOLEDO, Ohio — Two days are now officially complete at the Solheim Cup, and if Monday at Inverness is as exciting as Sunday was, we’re in for a fantastic finish. If you didn’t catch any of the action on Sunday, don’t sweat. Check out below for three things you might’ve missed from Day 2 at the Solheim Cup.

1. Team USA wakes from its slumber

Team USA has been playing catchup since a disastrous first session on Saturday morning, and in the early hours of Sunday, it looked like a blowout might be in order. The leaderboards around Inverness were dressed in European blue on the front nine, and the energy had been sucked from the pro-American crowd.

However, thanks to some spirited play from Danielle Kang and Austin Ernst, the gallery roared back to life and lifted the Americans to a dominant three-point foursome session. Along with Kang and Ernst, the American teams of Jennifer Kupcho and Lizette Salas, and Lexi Thompson and Brittany Altomare also earned full points to pull the score to 6.5-5.5 at morning’s end.

Click here to read more about the Team USA’s comeback.

With the crowds re-energized and the scoreboard tight heading into the fourball session, it was sure to be an electric afternoon. The match featuring Kupcho and Lizette Salas against Mel Reid and Leona Maguire delivered on that speculation and then some.

With numerous stuffed irons and clutch putts, the match was neck and neck throughout, and the final two holes served as a worthy finale.

After missing the green long with her approach, Kupcho holed a delicate chip shot for birdie to give the Americans a 1-up lead that sent shockwaves through the gallery. Not to be outdone, Reid answered with a clutch shot of her own, firing her approach on the 18th inside of two feet to end the match in a well-earned tie.

“That halve almost feels like a win right now,” Maguire said. “With the world-class opposition we were up against, we knew we were going to have to play some really good golf to come away with any sort of points.”

With the tie, each player featured in the match remains undefeated during this year’s Solheim Cup.

Shortly after play wrapped for the evening, pairings were announced for the Labor Day finish. Here are two matchups to keep an eye on.

Leading off in singles will be two major champions in Anna Nordqvist and Lexi Thompson. The Solheim Cup veterans are no strangers to the pressures of team competitions, and they will look to set the tone early for their teams.

These two may be Solheim Cup rookies, but they arguably have the most compelling matchup on Monday. Neither has lost a match this week at Inverness, and both women have provided a huge lift to their respective teams. This sequel to their epic four-ball duel on Sunday will be must-watch.

You can find the full slate of matchups below.