We thought we knew Tiger Woods when he won the U.S. Open at Torrey Pines. We didn’t 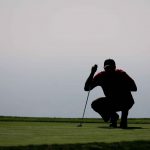 LA JOLLA, Calif. — This is about as good as good as it gets, this first stanza. Thin Lizzy, “The Boys are Back in Town.” The knob goes clockwise, you know.

Guess who just got back today?
Them wild-eyed boys that’d been away.
Haven’t changed, had much to say.
But man—
I still think them cats are crazy.
They were askin’ if you were around.
How you was.
Where you could be found.
Told ’em you were livin’ downtown.
Drivin’ all the old men crazy.

And then the refrain. Which is also the title. Because that’s how you sell a single.

The song is the anthem of this 121st U.S. Open, at least in this bureau. After a 13-year absence, the Open is back at the oceanside public course here, the South Course at Torrey Pines, where Tiger and Phil won as kids reeking of promise and as young men with pilots on their payrolls. Phil was born in ’70. Boys came out in ’74. Tiger was born in ’75. Tiger once said that he liked any music from the ’80s. It’s not his fault.

Really: It’s not his fault. We’re all products of our times and our people. Robin Williams says it 10 times — “it’s not your fault” — in that late scene with Matt Damon in Good Will Hunting. That poor bastard, after all the things he did for us. RIP, sir. Did you see that coming? You can never really know another person’s pain. Joy is more obvious. That’s why sports sections have been so popular through the years.

Phil is back in town. Bones is back in town, but not as Phil’s caddie. (He’s doing TV.) Lee Westwood is back, 13 years after he was one shot out. Johnny Miller’s not. (Retired.) Tiger’s not. (You know why.) Rocco’s not. (He aged out.) Bryson was watching, 13 years, and 100 pounds, ago. Talk about your wild-eyed boys. I just looked up Ian Poulter, at the ‘O8 Open. He played 15 holes. The rough was bad and his wrist was tender. Rocco and Tiger got in a playoff at one under.

There’s been a lot of blue-air nostalgia, in these days leading up to our four-day Super Bowl. Tiger’s putt to end that Sunday, 13 years ago. Rocco’s red shirt on Monday. The Tour players bound for the Hartford tournament, on the tarmac, watching the playoff go into a playoff. Dan Hicks, revisited: Expect anything different?

That Rocco, what a character. We didn’t know then what we know now, Rocco’s addictions and all the rest. Maybe you saw the VH1 “Behind the Music” special on him. Excuse me, it was Golf Channel, Rich Lerner presiding. If you’re not going to talk to Lerner, who you gonna talk to? Now Rocco has a new wife, and they have a daughter, and nobody is talking about Rocco’s online gambling issues anymore. Happy, happy, happy.

As for Tiger, it wasn’t just his body that was falling apart, back in 2008. Since then, there have been books about the man, some docs, mag writers going deep now and again. But in June 2008 we knew nothing. Tiger’s done a good job of circling the wagons. We paid his bills and then some, but that didn’t put us on a need-to-know basis.

What we saw was the pure sport of it, Rocco v. Tiger, on that Monday in June 2008, on a cliffside public course. RC Cola v. COKE.

A half-day earlier, on that Sunday night, a reporter asked Tiger about his knee. Tiger gave a two-word answer. It was a big press tent. Tiger seemed like he was a mile away, literally and otherwise. The boys (and the few girls) were nervous. You know: on deadline, big event.

We paid his bills and then some, but that didn’t put us on a need-to-know basis.

It was Father’s Day. Somebody asked Tiger what he would want his young daughter to remember about the 2008 U.S. Open, not yet concluded. “That I got a W,” he said. We laughed, as if it were funny, and it was. That joke is Tiger’s default move. He was Earl’s son. Likely still is.

About eight years earlier, in the sunrise of a new millennium, Tiger played golf through the streets of New York City in an American Express TV spot that was expertly selling a myth we were only too happy to buy. A snippet of music filled the ad, a song by Moby. The title is the lyric, repeated over and over, plus a few extra words.

Before that sun goes down.

I had to call IMG to find out the name of the song, as Google didn’t know everything back then. Back in the day. Find My Baby. As I recall, Mark Steinberg’s assistant came up with the answer. Bless her. She picked up a ringing phone. Later, she called me back. That’s Cleveland for you.

The backup singing is spectacular on that Moby song. On the order of Merry Clayton in “Gimme Shelter.” Brad Faxon’s caddie, a long time ago at Torrey Pines, groaned when Tiger hit one right on the face, so pure was the iron strike and the sound that came with it. That was Tommy Lamb. Mick Jagger groans at the 3:02 mark in Shelter. Clayton’s note is so echt Mick can’t take it in silence.

You think Tiger got that ball in on 18 on that Sunday 13 years ago by himself? You may think whatever you want. My take is that Earl, two years gone already by then, read that putt. In some fashion.

What really went on behind the curtains — in Cypress, Calif., in Orlando, at Tour stops — we don’t know, we’ll never know. What Tiger did, what his doctors did, what Earl did. To his body, to his head, to his body, to his head. You can read this and read that, watch this, watch that. You’ll get a glimpse is all. But that ball did go in, on that Sunday night, 13 years ago. That’s for sure. Bumpity-bumpity-bumpity — down. No, I didn’t expect anything different. Was standing right there. Every eye was on Tiger — or on the back of some guy’s shirt. All I could see was Rog, shaking his head, muffs on his ears, mic at his lips. I think. It’s kind of a blur. The Course Whisperer.

Thirteen years later, it’s depressing, to imagine Tiger in that big, isolated house of his on Jupiter Island, in South Florida, trying to learn how to walk again. That was not a car accident, what happened in February in Los Angeles. It was a crash. It’s almost inexplicable, what happened. It’s no wonder that Tiger has made no public appearances since February.

You have to feel for him. He should be here. We should be writing the hunt for No. 16, right about now. Or Phil-Tiger, Part — whatever. Tiger’s game was built for Augusta but the U.S. Open is the U.S. Open.

Guy Boros told me the other day that his father loved the Open because it was open, and because it was demanding. Anybody could qualify for it. Mr. Boros won it twice, and he tied for fifth the year Jack Fleck — Jack Fleck! — beat Hogan. (Talk about an open Open.) J. Boros had some face. I once was having a Coke at Sam Snead’s house. (Name-dropping here.) There was an image on the glass. I said that it looked like Julius Boros. Snead said, “It is Julius Boros.” He had the whole set. A friend’s father once said to me, regarding Julius, “He had a face that belongs on Mount Rushmore.” Boros died on a golf course, at Coral Ridge, in Fort Lauderdale, Fla. Right by the 16th green. There’s a bridge and a plaque there. It was his spot to sneak smokes.

We don’t know everything and we shouldn’t. But with Tiger, about the only thing we knew was that the putts he needed fell.

This is Tiger’s U.S. Open, as much as it is Phil’s, or Bryson’s. This open nods, here at its start, to the Tiger in our memory bank.

This will be the fifth Open he’s missed since then. In three other Opens he missed the cut. But in our memory bank, Tiger’s putts drop and his clubs twirl. He hugs his father, he kisses his wife, he lifts the trophy. He was some show.

Except that he wasn’t. That’s at the core of his conflict. He was sold as a show, as everything is a show these days. But that 2008 was way beyond a show. It was pure. It was mano-a-mano. An 18-hole Monday playoff, convenient for nobody. The last one. Now it’s two holes, Sunday night, count ‘em up. It was TV that wanted a Sunday night finish. The USGA purists did not.

I asked Mark Steinberg, by text, if there was any memory from Torrey Pines, from our last time here, that he could share. Something he, as Tiger’s agent, saw that we, in the peanut gallery, did not. Something that could help us understand, just a wee bit more, what Tiger did that week, on the Sunday, on the Monday. You know: How he was. But Tiger, even in the best of times, played close to the vest, and these are not at all the best of times. If I hear from Mark Steinberg, and I sometimes do, I’ll pass along what he says. It’s not likely.

It’s hard not to be in pain for Tiger Woods, on the eve of this great championship, and corporeal Tiger is just the starting point. The city of San Diego is planting a plaque for him at Torrey, a reminder for the next generation what is, for those of us who saw it, stamped in our minds. Rocco said the scorer’s room shook after that putt fell Sunday night.