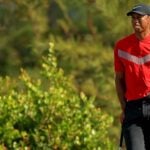 Tiger Woods at the Hero World Challenge in 2019.

Tiger Woods, just about a week ago at this time, took his iron back, swung it forward and gave the golfing world a three-second peek at his progress from his car crash in late February.

We could get more this week.

Woods’ tournament, the Hero World Challenge, is Thursday through Sunday, and while he won’t be playing in the Bahamas, the host could be hosting. Woods’ camp has remained tight-lipped as to whether the 15-time major champion will make his first official public appearance since the accident, but there are at least five reasons to believe he will. Let’s examine them.

His yacht is there

Woods’ yacht, Privacy, left North Palm Beach, Fla., near the start of the month, arrived in the Bahamas shortly thereafter and is currently moored there, according to MarineTraffic.com. Of course, the site tracks only boats, and not who’s on them.

Still, in the past, Woods has sent Privacy near tournament locations, then flown in later and stayed on the boat during the week. He’s done this at the 2018 U.S. Open at Shinnecock Hills and the 2019 PGA Championship at Bethpage Black, both of which were on Long Island. This time around, it would also seem like a long way for Woods’ boat to go and not have its owner nearby.

Remember, though, we’ve been duped before by Privacy’s movements. In June of 2020, as the PGA Tour was nearing the end of its three-month hiatus, the boat was bound for St. Simons Island, Ga., and there was speculation that Woods would be playing in the nearby RBC Heritage — only for him not to.

The players already on site are excited

Rory McIlroy and Patrick Reed are among those already in the Bahamas, and both sounded excited at the possibility of a Woods appearance, when interviewed by Bernie McGuire of the Golf by TourMiss website.

“Though as I said the most important thing is he gets back to being strong again and fully healthy but then it will be great to see him this coming week and for all of us to express to him how we’re all thinking about him and to wish him continued good improvement in getting back on the tour,” Reed told the website.

“We missed him at the Masters dinner in April, but again, we all just want to see him get himself back to being fully healthy, and if he does turn up this week, it would also be great to shake his hand and just to say hi.”

Before the Hero, and outside of a few early tweets from his personal account, and some grainy fan photos, updates on Woods’ progress had come only from his fellow pros. Justin Thomas, via the No Laying Up podcast, was the latest to do so, and he was asked about a potential Woods comeback.

“I don’t know. I mean, I know that he’s going to try,” Thomas said. “I don’t see him ever playing if he can’t play well. He doesn’t strike me as a guy who’s played at home and he’s shooting a bunch of 75s and 76s, and he’s like, ‘OK, I’m gonna give Augusta a try this year.’ That’s not really gonna be him, at least from my understanding, what I know of him. He knows that there’s a pretty good chance that that was the last chance he really ever had, before that, of making another run, but at the same time, I know how determined he is and I know he’s going to want to at least try to give something again.

“Obviously I hope he does. But at the same time, as I said after the accident, as long as he can be a dad and be normal with that again, that’s the number one priority, and the rest of this is a bonus.”

As mentioned above, speculation on the Hero comes just about a week after Woods put social media users into a tizzy when he shared a three-second video and a two-word statement. The video showed Woods’ swing for the first time since the crash and the multiple procedures that followed. With it, he wrote: “Making progress.”

While there’s not much you can take away from so little, Woods at least appears comfortable again with getting back into the wild. Last week, a video. This week, an appearance. We can see it.

And then there’s this from Golfweek, which reported that the PNC Championship, a parent-child event next month, has held off on completing its field to accommodate a possible entry from Woods and his son, Charlie.

“The message came: not just yet!” a source told Golfweek.

At last year’s PNC, father and son Woods finished seventh, and the younger Woods was a hit in his television debut. If the family Woods does decide to play this year, it would no doubt be beneficial to appear at the Hero, get all of the questions answered, then play golf, father and son.

It wouldn’t be the first event Woods has attended

Earlier this month, former NASCAR driver Michael Waltrip tweeted that he talked with Woods at a corporate event for Monster Energy, one of Woods’ sponsors. The TW Legion Twitter account reported that it was held at the Albany Golf Club in the Bahamas — which is also the site of the Hero.

Will Woods be back this week? There are at least five reasons to believe he will.