His father’s son: Watch Charlie Woods play golf, and there’s no doubting who his dad is 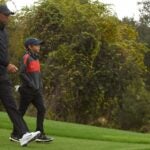 Father and son were in sync on Thursday.

ORLANDO — Who do we begin with, the father or the son? Well, let’s say this, after seeing him in action for the first time: the son is a chip off the old block. Joe LaCava Jr., a senior at James Madison working this week as a caddie at the PNC Championship, has the same erect carriage and no-nonsense demeanor as his father, Joe LaCava, inducted into the Caddie Hall of Fame last year. You know how Tiger has that move where he’ll walk off the green and, without ever looking down, casually drop his putter on his golf bag? Charlie’s got that move.

You know how Tiger will vigorously shake a water bottle after spilling his mid-round pink vitamin powders in it? Charlie’s got that move, even though his water bottle, on the 10th tee here yesterday, had nothing but water in it.

You know how Tiger has his yardage book in his back, left pocket and his glove in his back right when he’s on a green? Charlie fills his pockets the same way, too.

Without prying, we’ve seen glimpses of Charlie over the past few years, often alongside his poised and older sister, Sam. Here he is with father, striding toward the clubhouse of Tiger’s win in the 2019 Masters. Here he is at the Rose Garden, just a few weeks later, as his father received the Presidential Medal of Freedom. Here he is at the U.S. Open, watching the tennis from the stands, fist up after a Nadal winner, synchronized fandom, with his father seated beside him. The backward hats.

But on Thursday, golf did what golf does, it gave Charlie the stage to himself 50 or so times over the course of a five-hour, 18-hole fivesome pro-am round. It was a scramble format, meaning that each person hit a tee shot and a second shot and sometimes a third shot. Charlie’s last moment was the group’s last moment, a 3-footer for par on 18. The stage was his, he slipped it in, his hat came off and he fist-bumped with men a foot taller, and 100 pounds heavier, than he. The last bump was for dad.

From a distance, appropriate, polite applause from maybe two dozen — not spectators, not fans; that would be too much — onlookers. Tiger, surely in concert with Charlie’s mother, Elin Nordegren, arranged for Charlie’s coming-out party to be in a low-stress environment. Tiger’s done the math. He knows the cameras — the cellphone video and everything else — will be coming for his children. He’s breaking the ice in a civil and controlled environment.

Charlie and Tiger — alongside the LaCavas — played the front nine with two prominent NBC Sports lifers, the veteran producer Tommy Roy, and Jon Miller, the president of programming. There are a lot of ways to find a rich and rewarding life in golf, aside from being one of the best players of all time. There are few sports that will promote lifetime relationships like golf will, and that goes way beyond golf’s earned reputation for being a club for good old boys. Jon Miller and Joe LaCava have been friends — bonding over the New York Giants and golf — for over 30 years. Charlie Woods is going to make relationships in this game, too.

The most meaningful relationship in Tiger’s golfing life was, by far, the one with his father, Earl. One of the neatest things about Thursday’s golf was how little coaching Tiger did with Charlie. Actually, he did none. Tiger never told Charlie a thing before he played a shot. He might have a brief comment after a shot. He never told him what club to hit, what line to take. Tiger was taking his cues from his own father.

“My dad never coached me,” Tiger said after the round. “It was all about feels, about being there, being present, being with me. He did that, and I’m doing the same with Charlie.”

The best thing about Thursday was Charlie’s golf. There was no sign that he was any sort of golf prodigy, as his father was at 11. There was nothing to suggest he’s an elite junior player. That whole notion — to be an elite junior player — is so overblown and ridiculous anyhow. Charlie Howell broke 80 at Augusta National from the members tees at age 10. That’s prodigy golf. Charlie Woods is a wee kid with an untutored, flowing athletic swing. “Like all kids, he mimics,” Tiger said. Charlie has a smooth backswing and a let-it-all-hangout downswing. You can see that golf is fun for him, and that he loves being in his father’s company.

He twirls his driver as he steps into the ball, à la Justin Thomas, and after his good shots, à la father. He’s ready to go when he gets over the ball. He is obsessive about getting the line on his ball set just so before picking up his mark.

Tiger played his junior golf with sawed-down clubs that were way too heavy for him. Charlie plays with the best age-appropriate clubs TaylorMade can provide for him. If Charlie one day told his father he wanted to play with cavity-backed clubs, Tiger said he could handle that, even though he’s played blades all his life. (Well, there were some rogue Ping Eye-2 long irons in his bag now and again.) “The game’s changed,” Tiger said. Tiger grew up playing a ball that spun like a top. Today’s ball rises, sails and barely curves.

On Friday, there will be another long, slow pro-am round, and on Saturday and Sunday the actual competition, also in scramble format, will be played. On Thursday, there was never a moment where Charlie looked to be anything less than completely engaged. If you’re trying to get your kids off their screens and into fresh air, bring them to a golf course.

Responding to questions from a small group of reporters, Tiger said probably half a dozen times that the he had only one goal for Charlie’s golf, and that was for him to enjoy the game, and for father and son to enjoy the game together. He was asked if and Charlie had watched this event together in the past.

Tiger planted the seed, as parents do.