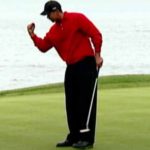 Welcome back to the Tiger Woods YouTube Project, where we’re in the midst of a winning streak. Oh, and Tiger is, too. Today, Bay Area resident Josh Sens breaks down one of Woods’ most unlikely comeback victories on a Monday finish at Pebble Beach in 2000.

Yeah, we already borrowed one video from 2000, but that was a heck of a year — which means it’s worth reinforcing from a few different angles. Before we join the action, let’s contextualize where Tiger Woods was competitively at this point in time. He’d finished off 1999 with wins in seven of his final 10 PGA Tour events, including his last four: two WGCs, the Tour Championship and the National Car Rental Classic at Disney.

Then 2000 began at the Mercedes Championship in Maui, where Woods and Ernie Els entered Sunday tied and remained that way heading to No. 18, where each made eagle (I repeat: each made eagle!) to get into a playoff. Woods birdied the first playoff hole and poured in a 40-footer on the second to win. In summary, it didn’t seem like Woods could lose at this point.

But it sure started to look like Woods would finally lose in his next start out. Midway through the final round at the AT&T Pebble Beach Pro-Am, he trailed by 7 shots. You already know what happened later that summer at Pebble, when Woods ran and hid from the rest of the field in a 15-shot romp. But you may well have forgotten the biggest late charge of his career. Let’s rewatch the film, shall we? And then we’ll hear from Northern California correspondent Josh Sens.

Here’s Josh Sens, proud Oakland resident, with 10 takeaways upon rewatching Woods alongside the rest of  you. Enjoy!

1. For starters, Tiger was so much younger. Granted, we all were. But what makes Tiger’s youth so striking in these clips is the fact that he was playing like a man among boys. This was skinny Tiger, pre-bulked up Tiger, and he’s practically swimming in his Sunday red (except that it’s a Monday; more on that in a minute). He also almost sounds like pre-pubescent Tiger. Listen to his voice, caught on microphone here and there. It’s that youthful nasal twang that is still evident when he speaks today but now not nearly as pronounced. If you close your eyes and cup your ears to the 2000 Tiger, you think, Wait, THIS is the guy who rules the world?

2. I’d forgotten that this was a Monday finish. Another wet week at the AT&T. That’s how it always used to seem to be. Not long after came an extended drought here in Northern California, which made a lot of us who live here wonder if it would ever rain again. It rained again last year, at the 2019 AT&T, when Phil Mickelson won on Monday at Pebble. It was the first Monday finish in the event since 2000. But I digress. Point is, it was not your regularly scheduled programming . I don’t have the TV ratings handy, but I wonder how many fans who’d watched on Sunday wound up missing out on this historic close.

3. And dang, what a close. Woods was five back to start the day and seven behind as he made the turn. His run really starts on 12, where he stuffs his tee shot to a pin tucked left on that long par-3. Yes, the conditions were spongy, but watch how softly Tiger’s ball lands there, on a slender tongue of the putting surface. If you’ve played that hole, you know how ridiculously tough that shot is for most mortals. But that was Tiger. Making the implausible look routine.

4. And then, of course, there’s the hole-out for eagle on the par-4 15th. 97 yards, with a wedge. A thunderbolt, electrifying TV. Re-watching it, I got a kick out of hearing the call from then-CBS commentator Bobby Clampett, who grew up on the Monterey Peninsula and had once been seen as the can’t-miss kid. With Tiger’s ball in the air, Clampett says he likes the club selection, and then, his voice rising, that he likes the shot. As the ball drops, Clampett punctuates the moment with a nice minimalist ‘Oh!’—a restrained call, straight out of the Frank Chirkinian school.

5. Tiger has a lot of special gifts, but in those days, one of his greatest X-Men powers was his ability to make everyone fold around him, even if they weren’t in his immediate orbit. You get a glimpse of this in the YouTube clips. No sooner has Tiger holed out for eagle on 15 than we cut to leader Matt Gogel botching a drive, and Vijay Singh leaving one in the bunker. Tiger was paired with Jim Furyk that day. We get a flash of Furyk’s name on the back of his caddie’s jumper, but otherwise, he’s nowhere to be seen. In addition to making them fall apart, Tiger had a way of turning his playing partners invisible, too.

6. Tiger entered this event having won five in a row. Five in a row! Soon to be six. The record winning streak in PGA Tour history belongs to Byron Nelson, with 11. That was in 1945. Ben Hogan won six straight in 1948. But extended win streaks simply don’t happen in the modern game. Aside from Tiger’s. In 2006-07, it’s worth remembering, he reeled off seven in a row.

7. So, Tiger jars his approach for eagle on the par-15th, and then, on the next hole, also a par-4, he nearly repeats the feat. As his ball is in the air, Peter Kostis — another broadcaster no longer on the CBS team — says that the shot sounded heavy. Um. Guess not. A nano-second later, the ball nearly drops in the cup.

8. Pebble itself plays so differently depending on the time of year. Winter and summer are polar opposites. It’s not just the wet and soft conditions turning firm and dry. The prevailing wind flip-flops, coming from the south in winter and the north in the summer. That’s something that comes into clear relief in years when the course also hosts the U.S. Open. 2000 was just that sort of year. And we know who won that one as well, in record fashion, on a Pebble that was playing very differently. Anyway, I was reminded of the winter winds while watching Tiger play 18 in the AT&T. Driver, long iron to just in front of the green. In the summer, when the wind is up, you don’t usually see guys playing the 18th that way. Not even guys like Tiger.

9. Speaking of the 18th, Tiger’s drive on that hole hugged the coastline on the left. It was an aggressive line, very risky. If it were almost any other player at almost any other time, you’d have to figure that he pulled it. But this was peak-Tiger, at a moment in a tournament when it mattered most. So you got to figure he hit it exactly where he was aiming.

10. So Matt Gogel, then a rookie, was going for his first PGA Tour win, but he stumbled home in 40 and lost to Woods by two. Crushing, right? But to Gogel’s credit, he wins this very event two years later. Nice bounce-back. I mention Gogel here because in the YouTube clip, they show two views simultaneously as Gogel is putting out on 18, with Tiger looking on from a split screen. When his win becomes official, Tiger celebrates in a three-way hug with two other guys who were in his inner-circle but no more: Stevie Williams and Butch Harmon. Our colleague Michael Bamberger just published an excellent book called The Second Life of Tiger Woods. Given all that Woods has been through, that celebration at Pebble in 2000 seems like many lives ago.