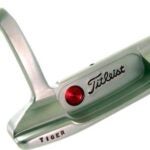 This is the closest you'll get to Woods' iconic wand.

What would you pay to own a piece of golf history? More specifically, what would you pay for Tiger Woods’ iconic Scotty Cameron Newport 2 GSS putter? The putter Woods used to win 14 major championships is arguably the most important club in the history of the game. Ryan Carey, co-founder of Golden Age Golf Auctions, estimated it could be worth anywhere from $3 to $5 million. Some would claim the putter is priceless.

To be clear, Woods’ gamer isn’t on the auction block. But a backup built to his exact specifications is part of Golden Age Golf Auctions’ latest golf lot. As the story goes, Cameron created one or two backup putters for Woods to test each season, in the event his gamer was damaged or needed to be replaced for some other reason. The 15-time major winner would roll putts on the practice green to ensure it checked out, but it never made an appearance in competition.

It’s still the closest thing you’ll get to owning the real thing, which is why Woods’ backups have continually gone for big bucks on the open market when they’ve popped up. What makes this one significant is the date it was produced for Woods: 2001. Better known as the year he completed the “Tiger Slam” at the 2001 Masters.

As Golden Age Golf Auctions pointed out in its listing, Woods’ “backup putters often vary slightly from his famous original. For instance, some are stamped ‘T.W.’ on the toe; others are produced in a later style or have slightly different lines or are missing the sight dot; many have a Scotty Cameron grip that Tiger himself has never put into play. But the offered example is a true backup to Tiger Woods’ legendary gamer. His exact specs, his exact stamping — even Tiger’s preferred Ping grip.”

In other words, this particular backup is the closest thing to Woods’ gamer — all the way down to the stamping, specs and grip.

With a little more than two weeks to go before the auction closes, it’s difficult to predict a final price. However, if you take into account the significance of the year it was produced, and the stamping, it’s fair to say the putter will should cross the six-figure threshold.

Be prepared to open up the checkbook if you want to own a piece of history. This one won’t come cheap.