This is how Bryson DeChambeau practices to improve his accuracy 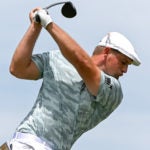 Practicing your accuracy is a game of process elimination, Bryson says.

NORTON, Mass. — Bryson DeChambeau swings hard and hits the ball really far. He’s done some truly astonishing work on that front, gaining upwards of 40 lbs in the gym and propelling himself to the top of PGA Tour’s driving distance rankings.

But golf is a game that requires more than distance. It’s about controlled distance. Hitting the ball longer can potentially make golf easier, sure, but if you don’t know where it’s going, it can become a lot more difficult in a hurry.

Bryson’s game was already in good shape — he clocked a T-4 finish at the PGA Championship in his last start, his career-best in a major — but looking to improve his game even more, he spent his week off not increasing distance, but honing his accuracy.

“My game feels really good,” he said. ” I think I figured something out in the golf swing that will hopefully help me hit it a little straighter.”

He went on to give some fascinating insight when I asked him about how he practices hitting the ball straighter.

Take notes, because it could come in handy for your own game: The first step to hitting it straighter is to find a swing thought that works for you. We’d highly suggest finding a coach for this step. It doesn’t need to be a big change, but it needs to be a specific thought or feeling designed to improve your technique.

Once you’ve got your swing thought, put it to work. Bryson says he usually starts with his driver, but you need to make sure your swing thought is one you helps you hit better shots with every club in your bag.

“If it doesn’t work with one club or a couple clubs, it usually won’t work with the rest of them,” he says. “I try and make sure it works throughout the whole entire bag.”

3. Work your way down with *every* club

Knowing you need your new swing thought to work with every club in your bag, now is the time to get to work. Once your driver feels good, try a new club. Once that feels good, it’s time for the next one. You don’t need to hit a ton of balls with each, but as Bryson says, you need to make sure it works with all your clubs.

“I’ll practice every single club. I’ll go down the bag, 3-wood, 4-iron, 7-iron, pitching wedge,” he says. “Once I get down to 4-iron from the driver, if it doesn’t work with 4-iron, I know it’s not going to work with the rest of the irons.”

4. If it stops working, return to step 1

And what happens when you make your way down the bag and your swing thought that worked so well on your driver stops resulting in good shots with your 7-iron? Then Bryson says it’s time to start again.

“Once I get to a spot where I feel like it’s not working, I completely stop it and I try something new,” he says. “It’s just a process of elimination going, ‘No, that didn’t help.’”

It may sound tedious, but it works. It’s a process of elimination, and when you do find something that works, you’ll know it’ll be with you on every swing.