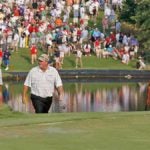 Mark Calcavecchia and Tiger Woods walk onto a green at the 2007 Tour Championship.

Mark Calcavecchia was facing a putt for some major cash, and Tiger Woods was there to help.

Calcavecchia recently joined the PGA Tour’s Talk of the Tour Podcast and explained some important words of advice Woods gave him before a crucial putt at the 2007 Tour Championship at East Lake.

Calcavecchia played with Woods in the final pairing for the final round, but this was a one-man race on Sunday. Woods led by eight on the final tee (he eventually won by that many) but Calcavecchia was battling Zach Johnson for runner-up money.

“I hit it on the green [on 18] and I was tied for second,” Calcavecchia said. “Tiger hit it 20 feet from the hole. I blasted my first putt about 8 feet by, so I said, ‘I’ll finish.’ And he walked by around behind me and said, ‘Take your time. This is an important putt, take your time. Take your time and knock this one in, will ya?'”

Calcavecchia remembers the significance of the moment now because, well, it was a crucial putt. He drained it to tie Johnson for 2nd and earn $619,500, which also helped him secure $600,000 in FedEx Cup bonus money for finishing eighth. Without Woods reminding him to take his time and relax, who knows? Maybe Calcavecchia misses and loses big money based off both his tournament finish and FedEx Cup finish.

“He knew it was probably about a $300,000 putt or something, and somehow I took my time and made it,” he said. “I’ll never forget that, that he came up and said that to me at the time. That was pretty cool.”