Tiger Woods’ fingerprints are all over the Match II, from the site to the broadcast crew 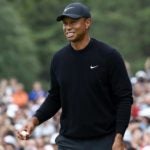 Tiger has been in the driver's seat for the Match II since the beginning.

Michael Bamberger is back on the road, keeping two club lengths from his sources. This is the second installment in a five-part Bamberger Briefly series from South Florida, about professional golf’s return to action. You can read Part 1 here.

WEST PALM BEACH, Fla. — In a normal year, the Florida Swing is a March thing: Honda, Bay Hill, Players, Tampa. This year, we never got beyond the first round of the Players, and we never got to Tampa at all. But two Florida events did emerge from these odd times.

The first, as every golf head knows, was Sunday at Seminole, featuring five marquee golf names: Rory, Dustin, Rickie, Matt, Seminole. The second, as every sports fan knows, is this coming Sunday, with five more shiny names: Tiger, Phil, Tom Brady, Peyton Manning — and Medalist. Medalist is Tiger’s home club. He and his son Charlie have logged a whole lot of golf there. Those 10 names don’t come together with the flip of a switch. Or off a single Zoom* call.

*A quick side trip, and you might find this interesting. Last year, in a GOLF Magazine interview, Andre Iguodala, basketball player and tech investor, was asked about what tech stocks to buy. He said, “For someone who doesn’t mind taking a gamble, look at the company Zoom. They do video conferencing.” Yes, they do.

We return to Route 1. (Seminole is about 18 miles south of Medalist on US1, on the east coast of South Florida.) Of these two May Florida golf dates, the Medalist event was by far the more complicated of the two to get off the ground. The match at Seminole was an NBC Sports affair, and Pete Bevacqua, the president of NBC Sports, is a Seminole member. That helped. Also, Jimmy Dunne, the Seminole president, is a yes-no, stop-go guy. That helped, too. He and Bevacqua, both native New Yorkers, speak the same language.

The Medalist event this Sunday is a Turner Sports property, as was the Tiger-Phil match in Las Vegas in 2018. Mickelson and his people were the ringleaders for the Las Vegas event, but that was then. On April 14, 2019, Tiger Woods resumed his place on the golf mountaintop. Three weeks later he was given the Presidential Medal of Freedom. Beat that.

Thomas is an inspired choice. He’s one of the brightest and most insightful people in the game today and he can bring a lot to this one-off gig. But it surely helps that he is represented by Excel Sports Management, which also represents Woods. Excel and Lagardere, which represents Mickelson, are the co-producers of the Medalist event. These names may be more user-friendly to you: Mark Steinberg, Tiger’s guy; Steve Loy, who is Phil’s.

Match II, in different iterations, has been in the works for well over a year. In other words, long before Covid-19 reared its ugly head. About the only two easy pieces in this upcoming event have been the quarterbacks.

Tom Brady has six rings, a Seminole membership, enough fame and money for five lifetimes. ESPN will need more than 10 hours for a Tom Brady doc. He’s in for the cause, raising money for various Covid-19 charities, and really nothing else.

As for the other one: When you’re dealing with Peyton Manning and golf, you just point him to the first tee. He can handle the rest. He’s a member of Augusta National and he’s a part-owner of Sweetens Cove, a public nine-holer in rural Tennessee. He’s golfy. He’s 44, but still boyish.

It brings to mind a nice sight I stumbled on to Monday, a father and his pee-wee golfer son, a lefthander, maybe eight or nine, who was hitting a series of pitch shots without even the hint of a divot. There was no hit, not a bit of hesitation, in the boy’s swing. This kid — he was a natural, you could tell. Tiger was once that boy. But that was a long time ago.