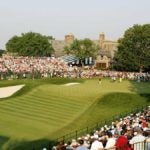 Winged Foot is still pegged to host the best players in the world in September.

While the U.S. Open is still expected to be held in 2020, qualifying for the event (and other USGA championships) will look much different. Local and sectional qualifying will not exist this year.

The USGA announced the decision Monday afternoon in a press release that also clarified a similar fate for the U.S. Women’s Open and the U.S. and U.S. Women’s amateur events.

“We have not taken these decisions lightly and wish we had more options,” said USGA director of Championships, John Bodenhamer. “But with a continued, keen interest in doing what is best for all involved, although we are extremely disappointed, this is the right decision.”

The USGA prides itself on its national opens being open to anyone. With the proper handicap, anyone can play and anyone can win. That is such an important aspect to the governing body that it rolled out a new tagline to accompany the opens this year: “From many, one.”

That will not happen in 2020. While Winged Foot is still expected to host the event, the typical exemptions will have changed. The Top 60 players in the world are normally exempt, but the USGA intends to use past opens to judge what exemptions should be used this year. That is particularly important information for Phil Mickelson, who promised he would not accept a special exemption from the USGA. Mickelson is currently ranked No. 61 in the world.

When the U.S. Open was still scheduled to be held in June, per usual, qualifying was initially canceled after the PGA Tour postponed its season. The breadth of qualifying extends across dozens and dozens of events over the course of numerous weeks on multiple continents. But when the U.S. Open’s dates were postponed and then rescheduled for September 17-20, it appeared as though qualifying could once again take place. Today’s announcement has officially ended those hopes.

Considering how much the coronavirus pandemic has shifted the hosting of professional golf tournaments, the 2020 U.S. Open could look even more different as time goes on. The USGA has not yet confirmed if spectators will be allowed at Winged Foot and are “building from the ground up” to create a new, safe championship experience for all involved.

‘I’m always uncomfortable’: How Danielle Kang found comfort in the uneasy and won