5 takeaways from our ‘What’s in the bag?’ video with Kevin Streelman 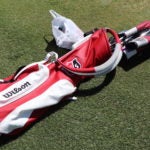 SCOTTSDALE, Ariz. – Recently, we caught up with two-time PGA Tour winner Kevin Streelman at the 2020 Scottsdale AZ Open to discuss what equipment is in his bag. While he’s still a regular on the PGA Tour, the Scottsdale-resident decided to tee it up — given the recent global circumstances — against a strong field of pros including fellow PGA Tour players Joel Dahman, J.J. Spaun, Nate Lashley and others.

After the first round of the event, where he eventually went onto to finish T10, Streelman walked me through his current equipment setup. In the video below, Streelman provided some great insight on what’s in his bag and why.

Here are five of my key takeaways from our interview with Streelman.

Due to social-distancing precautions, the Scottsdale AZ Open looked a bit different than regular Tour events. Players took their own carts instead of walking and having caddies carry their bags. As such, many golfers left their heavy staff bags at home, opting instead for lighter carry bags to lessen the load.

Ahead of the event, Wilson sent Streelman an awesome MacKenzie Sunday bag for the event. As an Illinois-native, Streelman was especially proud of the Chicago Cubs logo that was stitched on the interior of the golf ball pocket. Check out the full video above to see the reveal, and what Streelman had to say about the carry bag.

Going back 15 years to his days with Cleveland, Streelman says that’s he always preferred an open-faced driver. He calls it his “secret sauce.”

With the face cranked open, however, there are some adjustments that need to be made. Streelman explains how his new Ping G410 LST driver is setup:

“I like to look down and see a lot of face so I feel like I can release it. The key to that is when you open the face you have to have a lot of loft. I have a 10.5-degree head that I maximized open, which brings the loft down. It’s kind of the opposite of what a lot of people think. To open the face it actually brings the loft down, so it brings the actual (loft) down to about 9 degrees. And because it’s so open, I have to put a bunch of glue and weight in the draw-bias. I feel like that stabilizes the face and prevents the flair out to the right.. So that’s kind of been my secret sauce for the last 14 years on Tour of how I’ve setup my drivers.”

Look in any PGA Tour player’s bag, and it’s likely that the oldest club in their setup is a fairway wood. For many golfers, it’s difficult to find a fairway wood they truly trust, so when they find one, they stick with it. And when something happens to that fairway wood, it can be upsetting.

Streelman, for example, is still heartbroken over an accident with his former TaylorMade Rocketballz fairway wood. He’s since moved onto something new that he loves: a TaylorMade M2 Tour head, with the same Oban Kiyoshi Purple shaft he had in his Rocketballz.

“I was playing the Rocketballz a few years back,” Strelman explains. “Great 3-wood, and I loved it. It shattered at Bay Hill. I’ll never forget it. It just cracked right along the top. The entire front line of my Rocketballz was just shattered, and I was in tears basically. So TaylorMade was like, ‘Let us make you up a new one,’ and I was like, ‘No, no.’ I pull this shaft out of my Rocketballz head … they threw this head on there, and it’s been like my baby ever since. But this shaft has literally been in my bag for five or six years now.”

As Streelman explains, he’s struggled a bit finding the right club to fill the gap between his 3-wood and his longest iron. For him, hybrids tend to hook, and 5-woods tend to balloon and get caught in the wind.

His solution is a modified Ping G fairway wood that sits in the middle between a hybrid setup and a 5-wood.

“My 5-wood is also a little sneaky,” Streelman says. “It’s a Ping G … I wanted a versatile club. This is sitting at 17.5-18 degrees. Kind of a standard 5-wood, but I got it very short and very heavy. It’s a 110 gram shaft and it’s an inch-and-a-half short, so I find that really stabilizes that extra spin factor that was causing me heartache.”

After a poor putting season in 2019, however, Streelman decided to get a putter fitting at Ping with a completely open mind. Here’s what happened:

“I went to Ping in November,” Streelman explains. “I said (to them), ‘I’m not going to tell you what I like. I’m not going to tell you my length, I’m not going to tell you anything. I want you to tell me where I fit.’ And it was amazing going from my Newport 2 to (a Ping PLD mallet). The stabilization of the face. It’s a double-bend shaft. I’ve always been more of a plumber’s neck guy. That took out a ton of face rotation for me. The topline is way thicker than what I’m used to. It was a big change for me, but I just trusted them and I’ve been putting great ever since.”

Here is Streelman’s full setup (he also has a Wilson D7 3-iron that he replaces his 5-wood with, depending on course conditions):